Tavira: You can now visit the sacred art exhibition “On Earth as it is in Heaven”

Show is called "On earth as it is in heaven" 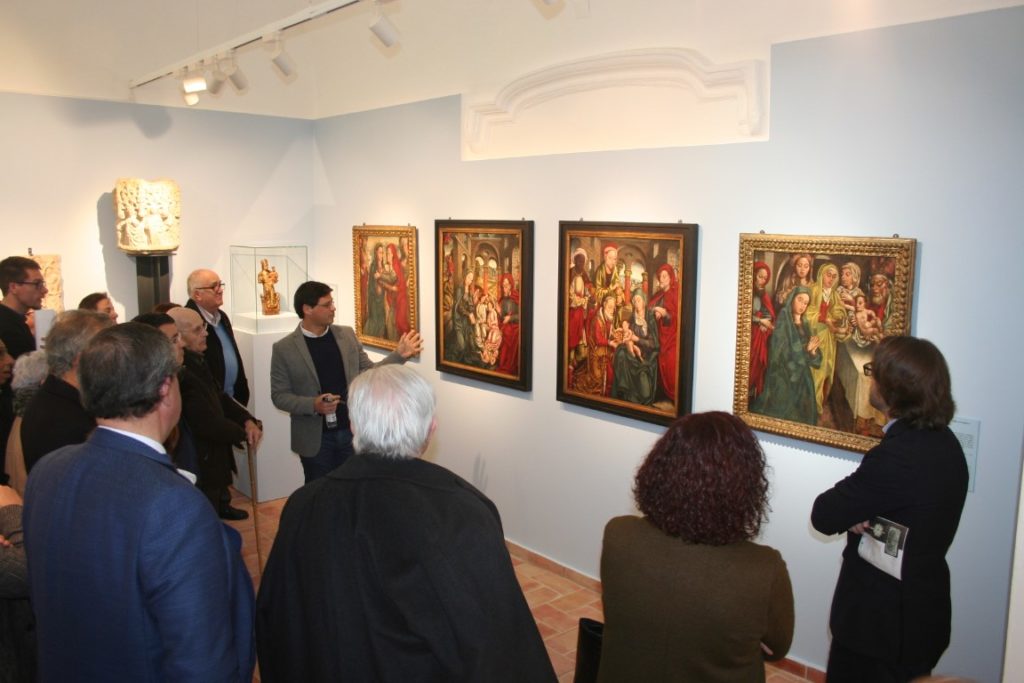 A collection of sacred art from the Parish of Tavira can already be visited, since last Sunday, December 8th, in the Church of Santa Maria do Castelo.

The inauguration of the exhibition was attended by the Bishop of Algarve D. Manuel Neto Quintas, Jorge Botelho, Secretary of State for Decentralization and Local Administration, José Baía, President of the Municipal Assembly of Tavira, João Pedro Rodrigues, City Councilor and responsible for the department of Culture, José Mateus Costa, president of the União de Freguesias de Tavira, and Alexandra Rodrigues Gonçalves, director of the School of Management, Hospitality and Tourism of the University of Algarve.

Entitled “On earth as it is in heaven” (a passage from the Gospel of St. Matthew – 6,10 – and one of the excerpts from the Our Father), the exhibition makes even more clear the strong connection of the city of Tavira to the Catholic faith.

In the words of the curators Marco Lopes (director of the Municipal Museum of Faro) and Daniel Santana (Heritage Technician of Tavira City Council) there is «a strong religious and spiritual charge, which has a natural repercussion in the history, architecture and art of Tavira, whether in the conquest of the territory, in the administration of temples, in construction of new religious buildings and the social habits of the local community, which participates in liturgical services or processions».

Thus, this ""On earth as in heaven" means that the Church, as an interpreter of the divine will, establishes the rules and behavior of society and the ministers of the faith, then translating them into a series of artistic objects that should respected and adored».

This place where the exhibition is located was closed to the public for some time, and renovation work was carried out on the exhibition space, «using the same rooms and keeping some of the objects», explain the curators.

«In addition to new furniture, which highlights and enhances the pieces, without forgetting conservation issues, this exhibition center will have explanatory texts, which draw a common thread between the history of Tavira and the local religious life, during the XNUMXth and XNUMXth centuries ».

Likewise, care was taken that the pieces were not limited to "a laconic legend, with date and titles, but a brief description of their historical and artistic significance."

All these texts will also be translated into English, as the city is very "frequented by foreign tourists", who will thus be able to follow "all the reasoning behind the exhibition and the identity of the pieces", stress the two responsible for the preparation. and organization of the visitable collection, which, in due course, will also have «a catalogue, with more developed texts in relation to the themes and pieces on display».

Visitors will find «essentially pieces of a religious character, with devotional functions, used in the context of liturgical ceremony or as elements of worship», explain Marco Lopes and Daniel Santana. From «paintings, to major religious images, passing through extraordinary pieces of nanbam art, vestments, books and goldsmithery, many of them originals from Santa Maria, others from Santiago and some from São Paulo», all will be accessible and with information that will explain the its origin and function.

«The reason for choosing these pieces is based on two criteria, one chronological and the other thematic, which go hand in hand», refer the two specialists in heritage and museology. 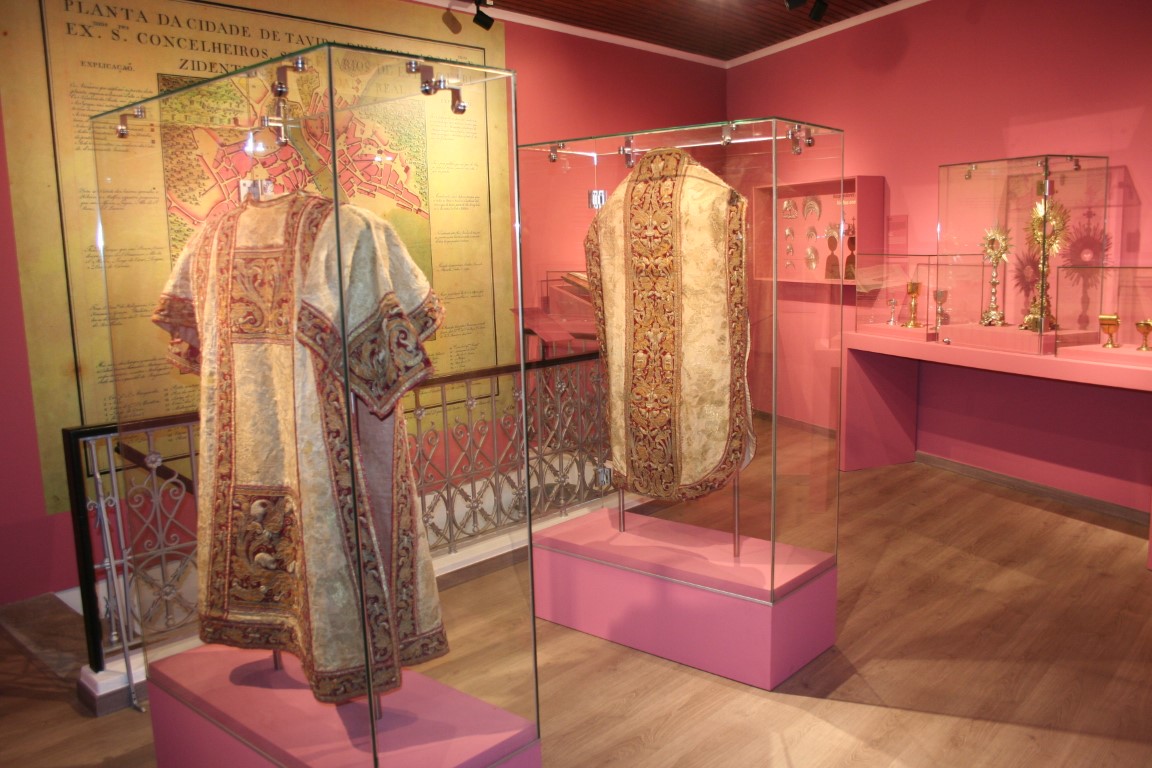 «The history of the city of Tavira is inseparable from religious life, from the outset to the church of Santa Maria. At the beginning of the exhibition, we wanted to bear witness to the entry of Saintiaguista knights and the cult of the martyrs, but also to the international contact of this locality, evident in works or artists that have distant origins. Then we enter the baroque, with pieces from the XNUMXth and XNUMXth centuries, which place us in a time of artistic luxury, of many religious buildings in Tavira and the appearance of various brotherhoods, in which staging and spectacle dominate inside the temples».

The selection of the pieces was, from the curators' perspective, the biggest challenge, as it was necessary to pay attention to their number and quality, in order to choose those that could fit in the rooms reserved for this exhibition. "There was a well-defined idea of ​​the themes, which had to be adapted to a small space", they clarify, but consider that "because it is a relatively well-known group of pieces, either because it had participated in previous exhibitions or because of the research carried out on its back, the preparation did not have great difficulties».

Miguel Neto, parish priest of Tavira, was naturally involved in the project.

Since his arrival in this parish in 2017, one of his greatest concerns has been precisely to safeguard the heritage.

"Since my concern was to find ways, particularly in terms of financial resources, to be able to invest in a project of this type", explains the priest, noting that "the income generated by the entrance fee and by the ARTgilão store are those that effectively paid for this exhibition, as there is no investment of public money in this project, which is 22 thousand euros».

In order to improve the work of preserving its spaces and heritage, the Parish of Tavira hired two restoration techniques and this work has borne fruit. It has also generated some partnerships, namely with Santa Casa da Misericórdia de Tavira, with whom some other exhibitions have been held.

«I believe that communion is generated in joint work, a sincere, honest work, aimed at valuing the heritage, but also the sense of community, because what I would like most, at the end of my journey through these lands, was to realize that the people are able to abdicate themselves, their particular idiosyncrasies, to create value for everyone, to be true witnesses of their history, their tradition, preserving them», he concludes.

Marco Lopes and Daniel Santana also consider that this work, which is now public, «is above all an act of respect and dignification of the heritage and historical memory, both of the city and of the parish», as well as «a sign of the new times , in which these treasures begin to be valued from an exhibition point of view, but also from their conservation and touristic dissemination».

And they add: "if today the churches are worth in themselves as spaces of cultural and tourist interest, this exhibition expands the offer of the tour itinerary in religious spaces and in the historic center of Tavira."

All – healers and priest – are in agreement on one point: the work must not end here.

"This is an important step for the inventory of these pieces and others that are in Tavirense churches, for monitoring the state of conservation and recovery of those in need and for opening new centers of sacred art," say the curators, considering even though «it can be a starting point for a policy of protection, study and enhancement of these artistic assets, which are part of local history and have enormous potential in the museological and touristic aspects». 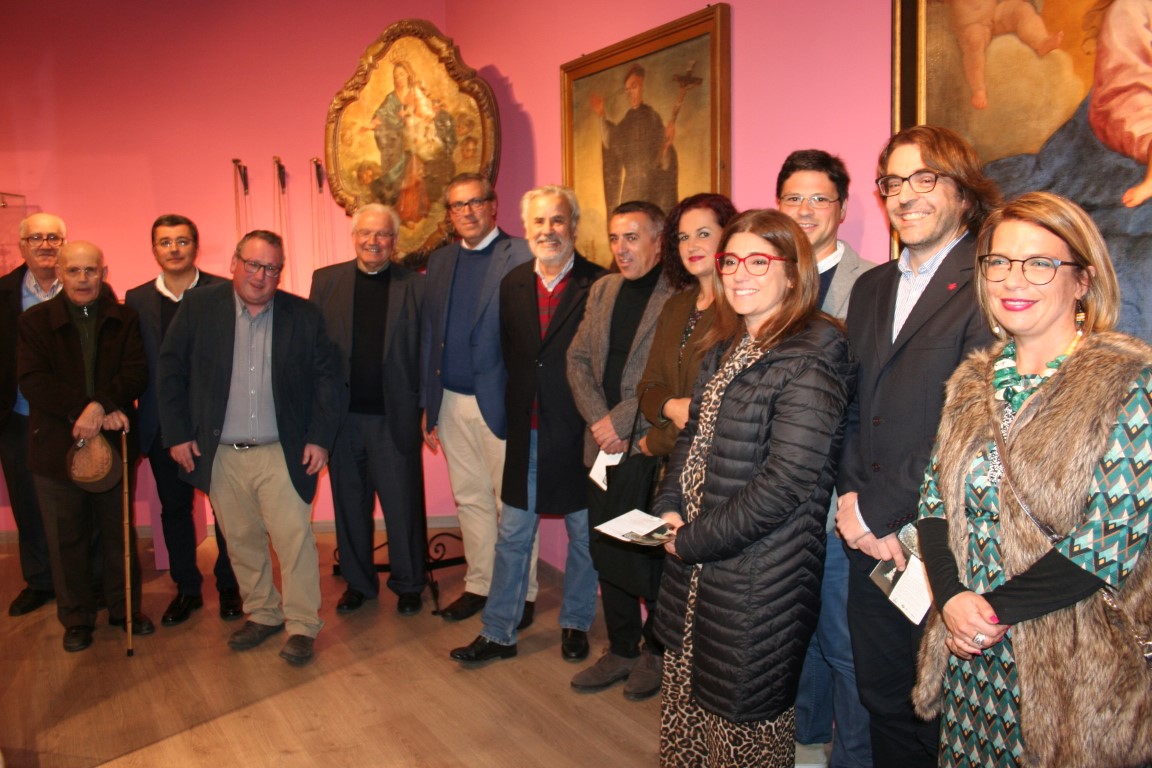 From the parish of Tavira, its parish priest, Miguel Neto, believes that this is just another step in the work ahead.

«I would like, one day, to be able to point out Tavira as an example when it comes to heritage conservation and, for that, I count on the collaboration of everyone, as this is a work that is worthwhile, especially because we do not think only about ourselves, but in future generations, who deserve to have a special city, where Faith is an identity mark, with a properly cared for religious heritage - as ARTgilão's slogan says, “The Art of a City of Faith”. Therefore, I have to thank Marco Lopes and Daniel Santana for their work and generous collaboration, who have been committed to making this initiative a reality from the start, as well as Marta Pereira and Maria Inês, our restoration techniques and Sandra Louro , who was in charge of the museography and the collaborators of ARTgilão and David Gonçalves, largely responsible for the assembly and practical implementation of this entire project», she said.

And he doesn't forget his parishioners: “I thank all those who collaborated more directly and all those who are always supportive or who challenge my perseverance and capacity for work. Without them, nothing would be done, and nothing would make sense, because I say again: what matters most is to cement the sense of community through respect and the enjoyment of heritage by all».

The curators consider this «a challenging and enriching project», highlighting the team work carried out and leaving «a final word to Father Miguel Neto, who has assumed the artistic heritage of his parish as a priority measure, in which this museological project will be a of their meritorious achievements'.