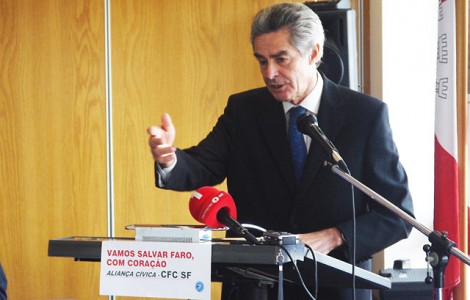 The municipal movement «With Faro in the Heart" demanded this Wednesday that Macário Correia "has a posture of State and immediately suspend the mandate" until the process is concluded in the Supreme Administrative Court that could lead to the loss of mandate of the current president of the Chamber of Faro.

Still, and unlike PS, main opposition party in Faro, the CFC considers “irresponsible to want to push the citizens to an electoral act”, when there is little more than a year to the end of the current term. At issue are "the costs that this would have," according to a statement sent to newsrooms.

The movement led by the former mayor of Faro José Vitorino made it clear that there is no pre-conviction in the public square, but that this process, whatever the decision, reveals "a way of being and of decision of Engineer Macário Correia". "We have always denounced and demonstrated that it does not study processes, decides against the law or without worrying about whether to comply with it," they accused.

“In the case of Tavira, whatever the decision, it went against all opinions and did not seek clarification from the technical oversight entities. In Faro, with the express vote of the PS, or the connivance of this party, there are many decisions with complaints that run in the Court of Auditors, Public Ministry, Finance Inspection, General Inspection and Local Administration», claimed the movement.

The PS is not spared criticism either. The CFC accused the socialists that, by evoking a policy "I want, I can and I command" to be followed by the municipal executive, "it is accusing itself".

"The PS also does not have the authority to ask or demand anything and should be silent, because after ex-president Luís Coelho was sentenced to one year and six months in prison, with a suspended sentence, it kept him as President of the Municipal Assembly", added the CFC.