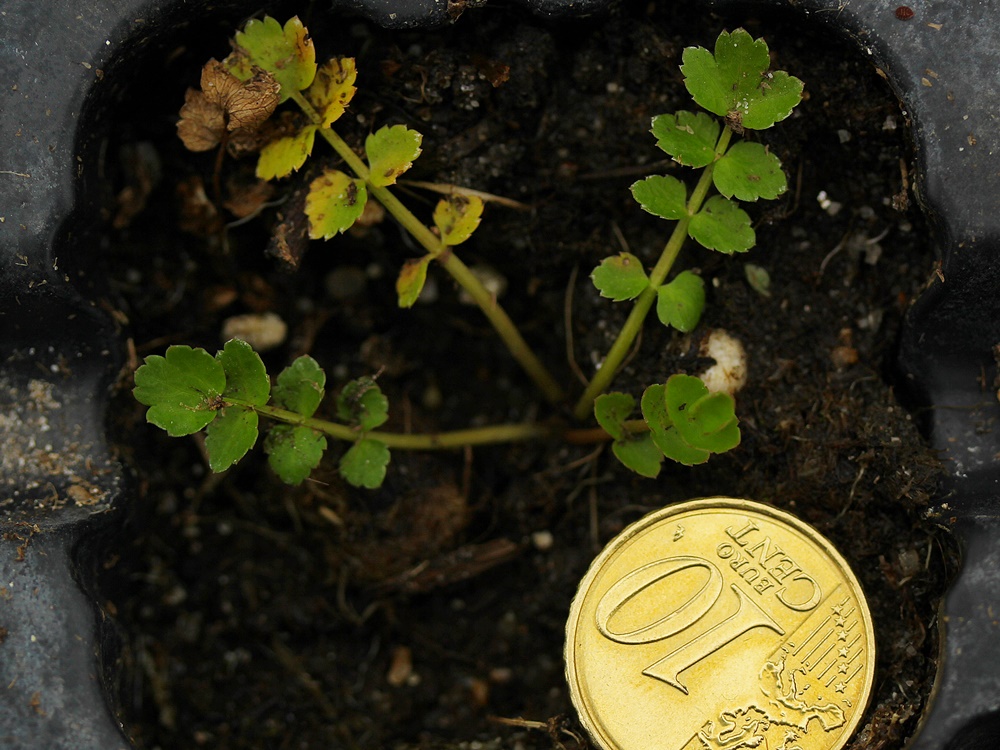 The University of Évora (UÉ) discovered a new species of plant. THE Helosciadium milfontinum, as it was called, is an endemic, rare and heavily threatened plant. The plant grows in temporary ponds and is restricted worldwide to small areas of the Costa Vicentina.

Carla Pinto Cruz, a researcher at the MED (Mediterranean Institute for Agriculture, Environment and Development) of the UÉ, emphasizes the importance of the discovery of this plant, whose set of flowers “reminiscent of a small umbrella, similar to the flowers of the watercress that blooms in July and August and bears fruit in early September”.

It has creeping stalks, “which root in knots and the leaves are lobed and have jagged edges” adds the researcher.

Thanks to this joint study between the UÉ and botanists from the University of Oviedo, “it is possible to clearly show that this new species differs from the previously identified one”, referring to the Apium repens, whose distribution area is wider in the European territory.

Through the study of the morphological and genetic characteristics carried out by the team of researchers, “it was possible to show that it was a different species from the previously classified one” where the occurrence of this new species “is restricted worldwide to small areas of the Costa Vicentina. ”.

Carla Pinto Cruz explains that, through taxonomic study, (the science that explores, describes, names and classifies all organisms and aims to organize the biological diversity of preserved specimens) and using samples from herbaria but also from nature. “it was possible to clarify the identity of this plant”.

The possibility of objectively identifying this species in the future is an advantage presented by the researcher, "now possible regardless of the time of year and only using small fragments of a plant" she explains, which also contributes to the DNA Barcoding database" (Encyclopedia of Life).

Since the beginning of the century, scientists have turned to molecular data to improve plant classification and species identification, Carla Pinto Cruz clarifies that, “based on the premise that a short standardized DNA sequence can allow for the distinction of individuals of different species”, such advances in this type of technology “can better infer the evolutionary and “kinship” relationships between different species”, as is the case in this study.

"It was through the identification of small DNA sequences, specific to each species, that the discovery of the Helosciadium milfontinum".

Associated with genetic identification, they integrate the evolutionary and kinship selections of species, "these relationships are studied by phylogenetic inference methods that assess the observed heritable characteristics (e.g. DNA sequences or morphological characteristics), whose result is then expressed in a diagram to which we call it a phylogenetic tree”, explains the researcher, noting that there are international rules for assigning the name to each plant (nomenclature), inscribed in the International Code of Botanical Nomenclature (ICBN), “created by Linnaeus, and used until today”, the binomial system is a standardized universal system.

Thus, each plant species is designated by a unique combination of two Latin words: first the “genus” and then the specific epithet, giving each species a unique name - recognized worldwide by all scientists - as it turns out with this discovery and whose specific epithet attributed milfontinum” because it refers to its area of ​​occurrence, that is, Vila Nova de Milfontes.

“The precise identification of each species is essential, but also to better plan our conservation efforts properly”, says the professor at the Department of Biology at the UÉ, since, in her opinion, “when we realize that this small plant is more genetically isolated from what we thought, we became more aware of its true status, its importance and the high degree of threat”.

Carla Pinto Cruz informed that this plant has already been the target of some conservation efforts, both in the region's temporary ponds where it can be found, but above all directed to the plant itself, through the project «Recovery of Natural Values ​​– Habitats and Species in Wetlands Temporary», coordinated by the University of Évora, an initiative launched by ICNF, in partnership with the Environmental Fund, which contributed to the conservation of natural values ​​and resources, the promotion and maintenance of biodiversity, as well as the restoration of habitats or enhancement territory, based on indigenous systems and species.

Although these temporary ponds in the Alentejo region are "very threatened from the point of view of their conservation", they present "a unique habitat that hosts a great diversity of organisms and where biological diversity is being lost as each species becomes extinct", alerts the investigator.

The carrying out of conservation actions and their proper planning "is essential" he recalls, noting that "the consequences of our actions on the planet are observed daily and the rapid pace at which changes are produced", reason to state "that only having one good knowledge of the species, as we have come to demonstrate in this study, we can properly view and prioritize conservation efforts”.