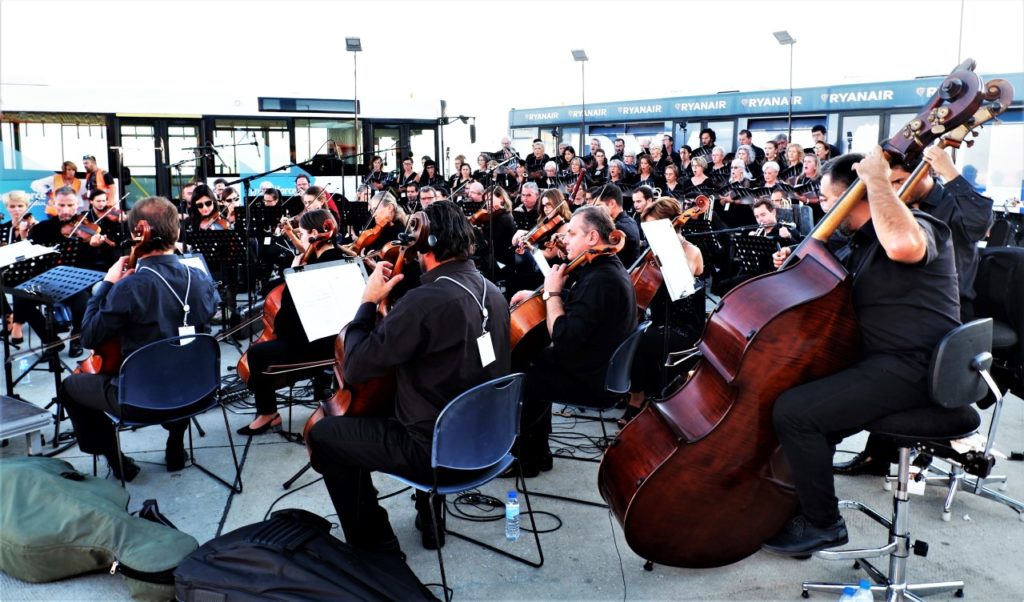 The PCP questioned the Minister of Culture about alleged abuses committed by the direction of the Orquestra Clássica do Sul on the musicians that compose it, ranging from bullying to the obligation to take a vacation in May, culminating in a lay-off in June.

Contacted by Sul Informação, Maria Cabral, president of the OCS board, confirms that there was a formal complaint of psychological harassment made "by a group of musicians", but stresses that this arose "in the context of a process of negotiations to review the internal regulations of the Orchestra". and ensures that the obligation to take a vacation, as well as a possible lay-off, were approved by the majority of musicians and are the way found «to keep jobs and save the Southern Classical Orchestra».

In the request for clarification sent to the Government, with the subject “Situation of the musicians of the Orquestra Clássica do Sul: bullying, mandatory vacation booking in May and lay-off in June”, communist deputies Ana Mesquita, João Dias and Diana Ferreira they demand to know if the Government is aware of the situation experienced by the musicians of the OCS and what it intends to do.

According to the communists, the alleged cases of psychological harassment are not recent and have already led to complaints from musicians, first to the direction of the Associação Musical do Algarve (AMA) and, later, to the Authority for Working Conditions.

«The orchestra's musicians, for what they told the PCP, question the direction and artistic mission currently followed by the OCS and denounce that for years they have been performing in some places that do not meet the minimum conditions required for artistic activity, due to lack of space, lack of changing rooms and washrooms, bad thermal conditions, among others. It should be noted that these issues are not minor, having impacts, from the outset, on the musicians' own health, but also on the instruments», according to the communist parliamentarians.

“To this must be added the lack of working conditions, namely acoustic ones, in the rehearsal room and the lack of ergonomic chairs. This situation has led to complaints from musicians about the emergence of diseases, from permanent hearing loss to hernias. This in a context in which there is a lack of musicians in the orchestra, which has only 26 and not the 31 that it should have, under the legislation referring to regional orchestras», according to the PCP.

"Following the protest on three occasions in which, according to the OCS musicians, the conditions for the exercise of their work were not met, the musicians reported that they were confronted by an unprecedented psychological harassment by the OCS Board, namely , threats of non-payment of salaries and closure of the Orchestra's activity», adds the same party.

Maria Cabral confirms the existence of this complaint, but insists that it “occurs within the scope of a process of negotiations for the revision of the internal regulations of the Orchestra, during which it has not been possible to access its demands, for example, the claim of the reduction in the number of kilometers traveled on concert days outside the Algarve, a salary increase fixed at around 21%, resistance to participation in educational concerts, etc».

Ao Sul Informação, the chairman of the board of OCS even reveals which are the three episodes the musicians complain about.

One was «the performance of an unprecedented concert in Ilha do Farol, in partnership with the City Council of Faro and the Portuguese Navy, and included in a negotiation process for the realization of other important partnerships for the Orchestra».

«For this concert, several national and regional authorities were invited. Both the musicians and the guests were transported in high quality boats on the Olhão-Farol. On the night of this concert, after a dinner in which everyone participated, evoking the existence of 63% humidity and wind (light to moderate wind, since the concert took place on a night in late July, in Ilha do Farol), with all the guests present, the musicians informed the direction that they “did not play” for the reasons mentioned above. Their reasons considered unfounded, they were told that their duty was to proceed with the scheduled concert».

The musicians also claimed lack of conditions at the concert they performed at the Airport of Faro, on World Tourism Day. «The bad conditions that the musicians complain about are due to the prolonged stay in an airport hall, identical to the halls in which we all stay at airports, and the long wait, which we all also experience, especially when we have to pass through areas sensitive security systems at any airport in the world”.

The third complaint is related to «the conditions of the stage set up for the last opening concert of the Academic Year of the University of Algarve. After verifying that it was smaller than expected (the stages are provided by the contracting entities of the concerts), a meeting was immediately held with the Maestro, in order to change the repertoire and thus the orchestra include fewer instruments (of larger dimension). Even so, before long lines of audience waiting, before the academic and local authorities already present, the musicians decided, after an assembly held at the concert venue, that they would not play. The directors had, once again, to remind them of their role as workers of the Associação Musical do Algarve and the fact that they may be compromising the image of the Orchestra, as well as questioning the relationship between AMA and the University of Algarve , its foundress».

In addition to bullying, PCP deputies also accuse the OCS of not respecting the working rights of musicians.

“This week, under the pretext of the Covid-19 epidemiological outbreak, it was learned that the Orquestra Clássica do Sul has decided that it will put the musicians in lay-off, keeping all administrative staff running at 100%. According to information that reached the PCP's Parliamentary Group, the musicians will be forced to take a vacation in May, their salary paid without food allowance, using the lay-off simplified announced for June. This is all when the OCS has more than 85% of guaranteed funding for this year», claim the PCP deputies, in the request for clarification sent to the Minister of Culture.

Maria Cabral speaks, for her part, of a «return in sales above 40%», due to the «cancellation of all concerts scheduled for the months of April, May and June».

Taking into account this reality, caused by the Covid-19 pandemic, «two scenarios were put to the musicians, having been asked to comment on them. Both the Orchestra Committee and the musicians, for the most part, were in favor of scenario 1».

The scenario in question foresees "the full payment of salaries (without food allowance) in the months of April and May", the scheduling of "three weeks of vacation between the 1st and the 22nd of May, inclusive" and another week vacation «from 8th to 15th of September, with full payment of the vacation allowance, during the month of September», as well as the full payment of salaries for the month of June by the AMA (without food allowance), or by Social Security, under the conditions determined by the lay-off simplified, subject to an assessment carried out at the end of May”.

The alternative, the so-called scenario 2, would be the full payment of salaries in April and recourse to the regime of lay-off, during the months of May and June, «the workers receive two-thirds of the gross monthly salary, paid 30% by the employer and 70% by the social security».

Thus, the president of the Orquestra Clássica do Sul says that she cannot say, for now, if she will opt for the regime of lay-off simplified, taking into account that, «considering the panorama of profound uncertainty that we currently live, in the social and economic planes, we do not have, nor does anyone, at this moment, have an answer to that question».

«What we can add is that the direction of the AMA/Southern Classical Orchestra has done everything, for almost two decades, to maintain the existence of this Orchestra, a fundamental cultural institution for the territories and audiences it serves, in the Algarve and of the Alentejo. In fact, in a past of recent crisis, some of the members of the board even subscribed to bank debt in their personal name, so that the payment of salaries of AMA workers, at the time seriously questioned, could be verified in a timely manner», concluded Maria Cabral.