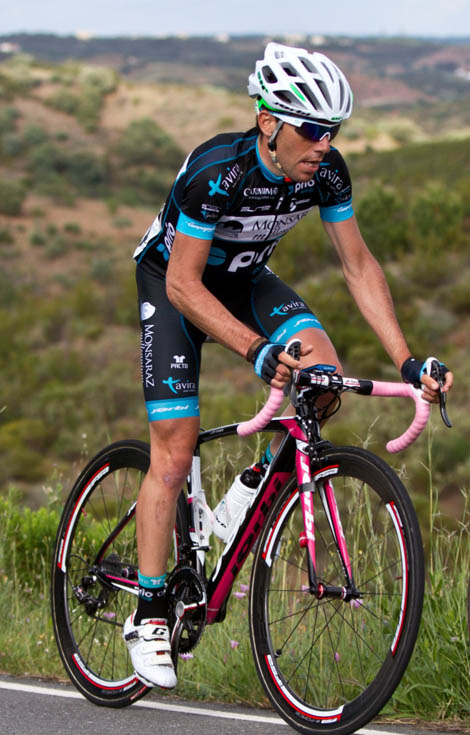 The Russian cyclist jumped out of the peloton already within the last 20 kilometers, passed the two cyclists who were then escaping, Micael Isidoro (Louletano/Dunas Douradas) and Salvador Guardiola (Gios-Deyser León Kastro), and only stopped on the finish line to raise the arms, celebrating the first victory of the season.

Efapel-Glassdrive made a tenacious pursuit, in the final ten kilometers, but the best they could manage was to take Sérgio Ribeiro to second place. The yellow jersey was third, extending the advantage to the more direct pursuers in the individual overall.

With only one stage left to finish the competition, Iker Camaño leads with 13 seconds ahead of Greek Ioannis Tamouridis (SP Tableware) and 16 seconds ahead of Ricardo Mestre (Carmim-Prio-Tavira).

This afternoon's take was marked by the escape of 20 runners, among which two Portuguese stood out. Nelson Vitorino (Carmim-Prio-Tavira), because he was the most combative, pedaling alone, at the head of a race, for almost 50 kilometers.

And César Fonte (Efapel-Glassdrive), because he was the one who profited the most from the initiative, reinforcing the leadership of the mobile goals and reaching the first place in the mountain's general. In the remaining secondary classifications, Sérgio Ribeiro continues ahead in points, José Gonçalves keeps the youth shirt and Endura Racing remains at the top of the collective general.

Tomorrow is the last and most difficult stage of this edition of the Joaquim Agostinho Trophy. The runners will cover 169 kilometers, between Atouguia da Baleia and the Carvoeira Wind Farm, with the goal coinciding with a second category mountain count. Along the journey, riders will also find a first-rate mountain prize and three third-rate mountain prizes.