In the middle of the Birds Festival, there is also talk of fish… and bioacoustics

Did you know that croakers sing? And the syrups too? If you want to know more about this subject and even hear the sounds of the sea and its creatures, just participate in the activity, free of charge and without prior registration, which is part of the program of the 13th Festival of Bird Watching & Nature Activities.

The activity «Listening under water», promoted by the Almargem association and having as guide the young biologist Manuel Vieira, takes place this Sunday, on Monday and Tuesday (2nd, 3rd and 4th), at 17:18 and 00:XNUMX, on the left pier of Porto da Beleeira, in Sagres.

The song, that is, the sounds emitted by fish such as croakers (argyrosumus regius) and the syrups (Halobatrachus didactylus), was the subject of Manuel Vieira's PhD in bioacoustics, at the University of Lisbon, within the scope of the Fish Bioacoustics Lab.

On the pier at Baleeira, on a hot late afternoon and without any wind, the biologist started by placing a hydrophone in the water, connected to a recorder and a computer, in turn with two pairs of headphones.

The first thing was to make the sound heard in the water, but right there on the pier: with headphones in my ears, the sound was that of an intense crackling. «They are shrimps», explained Manuel Vieira. But do shrimp make all this noise? They really do! And it's "with the tail".

“Crabs, hedgehogs and the like also make a similar sound, but it is usually of a lower frequency, a more serious sound”, he explained.

There were also some anthropogenic (ie, man-made) sounds, a kind of whistling, perhaps caused by the boats moored in the harbor.

Afterwards, the participants in the activity could hear sounds recorded by the biologist throughout his investigation: first the song of the xarroco, rhythmic and hollow, almost as if someone had serious and audible intestinal gas problems, then the more continuous song of the croaker.

«We were able to use recordings not only to know the animals that are in a certain place, but also how the environment is», he explained.

In the end, it was possible to see a video made in a coral area in Mozambique, with crystal clear waters, with synchronized sound recording. And it could be perfectly understood that the dancing of the fish under the water generated the recorded sounds.

“Our ability to know what is under water is still very limited. We don't have huge databases that tell us what sound is what. In birds, we have”.

And these fish sounds are made how? With the mouth, with the body, with the fins?

«The fish group is the one with the greatest diversity of sound production. Almost all birds produce sound with the same mechanism. In fish, we have at least ten known mechanisms and new ones are being discovered. The most common, which is the species that I have studied the most, the xarroco and the croaker, has to do with the swim bladder and it is with it that they emit sounds. In other species, they have a muscle associated with the swim bladder that beats and drums. Others have specialized structures just for sound, specialized bones, some tendons, which vibrate, work like a guitar. The sand goby [pomatochistus minutus] that very small fish, it has the bone of its skull, moves its head very quickly and produces a sound, almost like a reco-reco. There are others who do it with the fins. There is a huge world of sound production by fish», explained Manuel Vieira.

And are there fish that don't make sounds? “The only ones that still don't know if they produce sounds are sharks and rays. There is no record of them making any sounds and they are usually very deaf to the sound of pressure. They can be very sensitive to the electromagnetic part and to the movement of water». 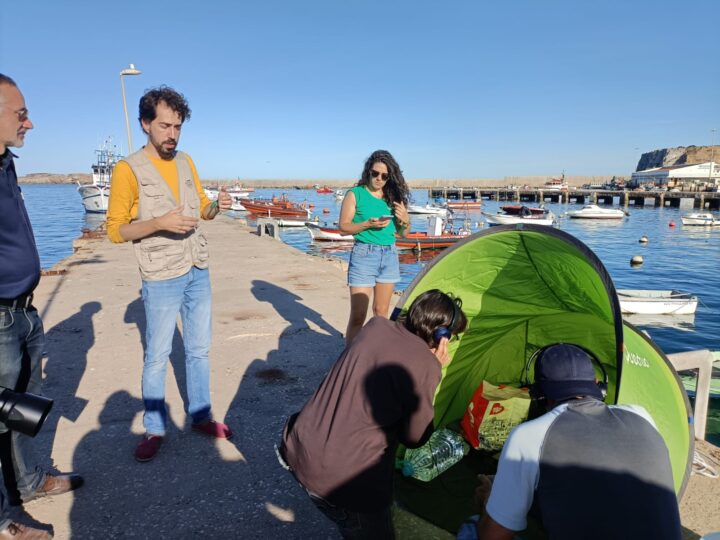 And what do the fish sing for? «Fight and competition, reproduction, calling the females», replies the biologist. The xarrocos, for example, «make a nest, sing, sing, sing, to call the females, until they go there».

If they don't sing, «these nests don't have eggs. If there is a lot of anthropogenic noise, for example, a lot of boats passing by, they have fewer eggs and the eggs die more. We think it's because the male is so stressed that he doesn't treat the eggs properly. Normally, he moves around inside, produces mucus…he takes care of the eggs».

Another interesting thing is that it was thought that only males sang, for example in corvinas. But that doesn't seem to be the case, females do too.

And what is the purpose of studying the sounds emitted by fish? Admitting that there is still a lot to investigate, Manuel Vieira points out that «we managed to extract a lot of information just with the sound they are making».

«For me, the most interesting thing is to put the microphone in a place and detect the patterns, but not only, try to do new things that tell me if the environment is good or not. And so I have to compare it with other types of ecological data.” The biologist gives the example of the recordings and filming that have been made on the corals of Mozambique, which show that the more species, the more sounds. So, he argues, "we can use these relatively inexpensive means to monitor a species over time."

But the surprises don't stop there: according to Manuel Vieira, the croakers sing especially at sunset. And they make authentic choirs!

In fact, he recalled, this sound of the croaker was already known to fishermen for a long time (and used by them to detect and fish) and is even mentioned in the book «20.000 Léguas Submarinas», by Jules Verne.

The activity «Listening underwater» is just one of more than 230 activities for families and nature lovers that, over five days, are taking place during the Bird Watching Festival, in and around Sagres. Many of these activities are already sold out, but there are some, like the one described above, that are free to access, without requiring registration.

Another option is to take your binoculars and camera and go to the top of Cabranosa (everything is duly marked with large wooden boards), where bird watchers usually gather. Some of them have the patience to go on explaining and showing to the less experienced what appears in the skies. Yesterday, for example, even without much effort, we saw countless booted eagles (hieraaetus pennatus) and many other species, whether on land or at sea, at pelagic outlets, by boat.

To find out what you can still do in these four days of festival, go to the secretariat that works in Fortaleza do Beliche, on the road to Cabo de São Vicente. Online registration has ended, but you can know the program here and then subscribe to whatever is still available at Beliche.

In this place, there is also a small fair of natural products, handicrafts and other arts and crafts linked to nature (such as illustration), publications and other materials produced by the various associations linked to the festival. Anyone who wants can, for example, buy an artificial nest for tits (small birds, but very important because they feed on pine caterpillars), buy honey produced in the Sagres area or even a painting made with an unprecedented technique: printing a fish real, on fabric, using cuttlefish ink.

Those who sign up for the activities, even the free ones, receive a festival wristband, which entitles them to discounts at participating restaurants and stores in Sagres. Until the 5th, there are many reasons to go to Sagres.

Researcher Helena Quintas talking about «Studying at university: from 8 to 80»