Game was open and well played 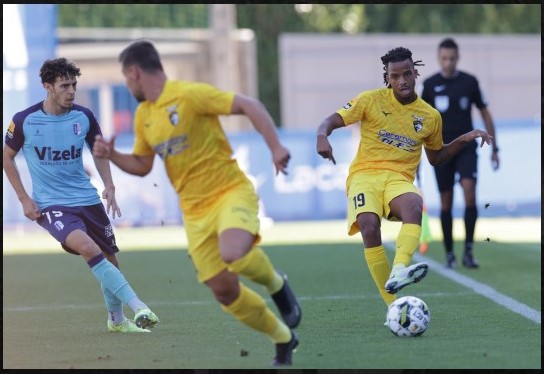 Portimonense lost 1-0 to Vizela in their trip to the north of the country this Saturday, October 1st.

The Algarve shared the game with Vizela, with both teams having periods of dominance, but they did not avoid defeat, in an open and well-played game in which both goalkeepers were in the spotlight, on a positive note.

The first chances of the game even belonged to Portimonense, but it was Vizela who took the lead on the 14th minute.

Defender Anderson Jesus, served by Tomás Silva, couldn't score with the first shot, but, in insistence, managed to beat Nakamura.

The Algarve team conceded the goal, but ended up meeting and ended the first half growing, despite not being able to draw.

The good signs given at the end of the 1st half were confirmed in the resumption, with Portimonense being very close to the goal in the 49th minute.

But, soon after, the home team almost extended the lead, but Nakamura stretched to avoid an own goal from Pedrão.

After this move, the Algarve temporarily lost control of the game and allowed Vizela several chances of danger.

It was only several minutes later that danger could be seen near Vizela's goal, but the Vizela goalkeeper responded in the best way.

Already in the discounts, Buntic returned to be decisive, to avoid the tie.

Despite the defeat, Portimonense remains comfortable in the league table, where it occupies, on condition, the 5th position, with 15 points added in eight rounds. Even so, the Algarve can finish the journey in sixth place.

Next Saturday, Portimonense welcomes Porto at the Municipal de Portimão, in a game counting for the 9th round of the championship.