The screenwriter will be tonight, in his hometown of Lagos, to watch the premiere of the tape directed by João Maia and produced by Tino Navarro

André Guerra dos Santos is from the Algarve, from Bensafrim (Lagos) and is also the author of the script for the Portuguese film «A Fada do Lar», by director João Maia, which opens this Wednesday, October 5th, in cinemas all over the country.

The 31-year-old screenwriter will be at the Algarcine Cinemas in Lagos, in the center of his hometown, for the premiere of the film, at 21:30. But before André Santos spoke with the Sul Informação, during a visit to ETIC_Algarve, the school where he played an important part in his training, shaping his future.

André was a student of the first directing course, when the school was still operating in Portimão, from 2011 to 2013. It was a training that, as he recalled, gave him «solid foundations» to pursue a career in cinema. Since then, he said, his journey has been made of «a lot of persistence in trying to tell my stories».

«My intention was never to follow other more technical aspects, although I have already done a lot of work as a production assistant, which is basically the background of the food chain». These works, he recalls, were carried out in reality shows of televisions from Northern Europe, which are recorded in the Algarve, to take advantage of the region's good weather.

«A Fada do Lar», a film starring Joana Metrass, an internationally recognized Portuguese actress, is based on an original idea by André Santos, author of the script.

As he himself told the Sul Informação, in Portugal, ideas usually come from producers, who come with the idea to a screenwriter so that he can develop it. Fortunately, I was lucky enough to find a producer – Tino Navarro – who had the openness of mind to bet on a story that he thought was valid ».

The film is «an original idea of ​​mine, which was then developed over time and had several versions, until it had its final version. In this process, there were many ups and downs, because we caught a pandemic in the middle. This was supposed to be filmed in April 2020…».

Despite everything, André Santos is very happy: «this was the first script I managed to see produced, after a few in the drawer».

And what is «The Home Fairy» about? «It is a comedy, but with a social message, it is not an idiotic comedy, it is concerned with pointing out social problems».

The film tells the story of Vera, a single mother of two who is forced to have two jobs to earn enough to support her children: by day she works at a supermarket cashier, at night at a bar, as a stripper, to able to pay the bills. History promises.

And what does it mean to have a script written by him to be produced, directed and performed by great names in Portuguese cinema?

André responds that «it is the validation of many years of work and of many people who believed in my madness. I took as many of these people as possible to the premiere last week at the São Jorge cinema in Lisbon. It was magical and strange to see two thousand people watching there, but also to see a Márcia Breia, a Manuel Cavaco, a Margarida Carpinteiro, a João Lagarto, a Dalila Carmo who are from the old school, two of them are even from a program that always I liked that it is «O Tal Canal», and they have made such valid paths, and now Joana Metrass, who is a very big bet of Portuguese cinema…It was magical!»

Does a script that is finally made into a movie open doors? "We hope so. The market is not exactly promising, but I have the hope and the will to make it happen, not only to tell the stories that come from my imagination, but also to tell stories that are proposed to me. Other works have been proposed to me, which have not yet seen the light of day because they are in the writing or financing phase. These are long processes”.

The screenwriter recalls that «for this “A Fada do Lar”, I signed a contract in 2018, we obtained financing in 2019, it was supposed to be filmed in 2020. That is, the pregnancies are very long and the deliveries are sometimes very difficult. ».

In summary, «the projects that will come may take some time, but they are expected to happen, both for cinema and for television».

André Santos emphasizes that «in television, there is now more focus on series. And there has been an opening up of streaming services, not only to show what is already produced by Portuguese channels, especially RTP, but they are also creating content, based on a law that, fortunately, was created last year and that creates obligations on the part of those streaming channels, depending on their profits'. 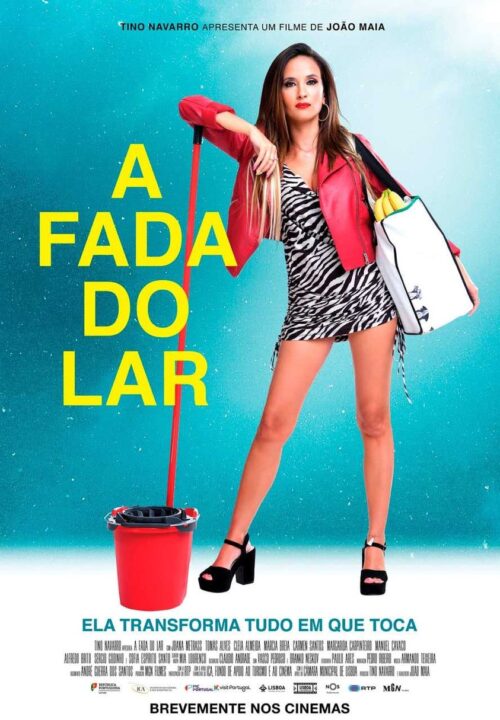 The film «A Fada do Lar» opens today in 50 movie theaters, from north to south of the country. But André Santos' attention goes to the room at the Algarcine de Lagos, where he hopes to have a «full house». A phone line was even opened to book tickets for the premiere (282799138).

«The city has already gotten used to seeing me in the theater with a full house», emphasizes the screenwriter, recalling his work as director of the theater group «Faz de Conta Gil», at Escola Secundária Gil Eanes, in Lagos. Therefore, «I hope that this Wednesday, at the premiere, the room will also be full».

André Guerra dos Santos considers himself an “acrobat”, who lives “between here and there”. In other words, he lives «at the southern end of the Margem Sul, in Setúbal», «out of obligation», but the rest of the time he lives in the Algarve, «by vocation». «Even because most of my stories take place here, they intend to tell the stories of the lives of people here. If I manage to achieve the realization, as I intend, my desire is to film essentially in the Algarve».

Portimão promotes cycle of webinars with “Tips for Parents”