The extraction of sand on beaches or dunes, the implementation of constructions in these mobile buildings or the transit of people and vehicles are causes of degradation. 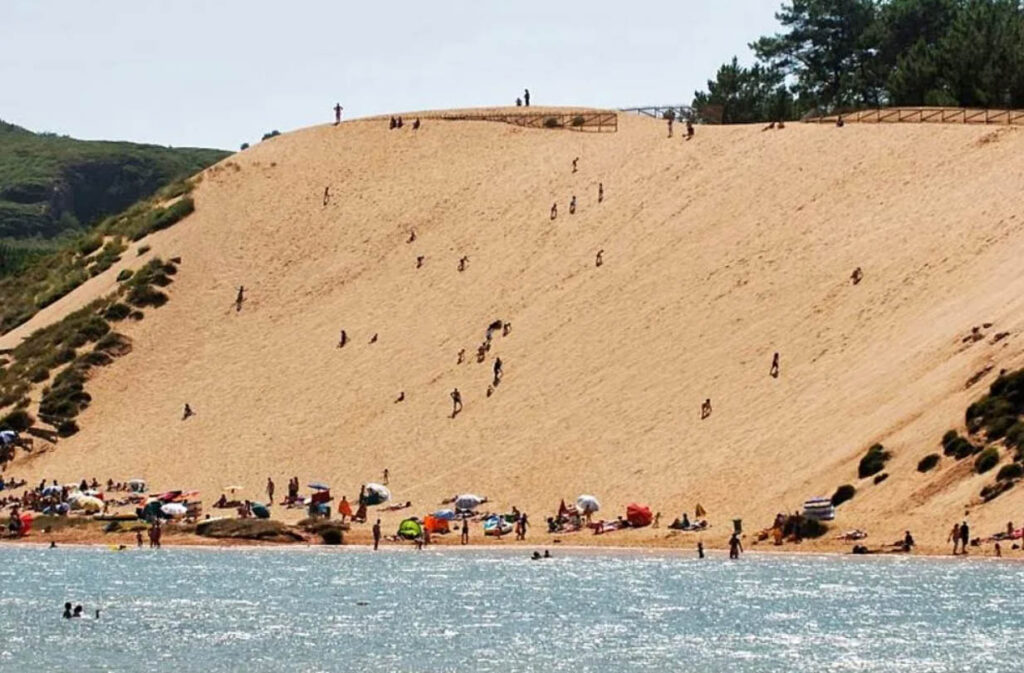 It's beach time and, to get to many of them, we have to cross sandy buildings that we all know, but that not everyone has had the opportunity to know what they are, why they are there and what care they require, as a natural heritage.

Dune buildings are not unique to sand deserts. They exist on the coasts, at any latitude, as long as the extension of the dry sand is sufficient, and there are no major obstacles in the relief that allow their formation.

Contrary to what happens with sand desert dunes, in coastal dunes the wind transport (by wind) is generally short. However, it only takes a few hundred meters of travel for the sand grains removed from the beach (rolled and with a polished and shiny surface, especially the larger ones) to be ground.

On the beaches, the prevailing winds, when animated by sufficient energy, sweep the sands with which they feed the dune accumulations, making them progress inland, invading the cultivated lands, with known dune progression speeds in the order of 25 Bro.

As long as the topography allows it, the dunes take on large extensions, generally parallel to the coast, forming ridges that sometimes extend a few kilometers inland. reaching heights in the order of hundreds of meters, as is the case of the Pilat dune.

In Portugal, the coastal dunes, also known as medos or medões, stretch, with interruptions, between Espinho and Vila Nova de Milfontes and on the Algarve coast.

Among them, the Salir do Porto dune stands out (in the image), south of the Concha de São Martinho. With about 200 meters in length and an altitude of around 50 meters, this dune is our tallest dune building, but it is far from reaching the dimensions of the great dune of Pilat, south of Arcachon, on the coast of the Landes (France ), with more than 2,5 km in length and about 110 m in height.

Coastal dunes are fixed as a result of vegetation, whenever it imposes itself naturally or artificially. There is a constant confrontation between the movement of sand and vegetation occupation.

Due to lack of food (on the beach), or when the wind speed slows down and, therefore, its carrying capacity decreases, the vegetation begins to settle, which constitutes an obstacle to deflation (the act of sweeping by the wind), increasing the vegetation occupation, until the dune is fixed.

On the contrary, in the areas most exposed to the actions of the wind and as long as there is sand available, its constant movement does not allow the plants to settle and the dune grows and progresses.

In these terms, an unstable frontier is established, where actions are neutralized, and which oscillates according to occasional variations.

Man can intervene in the displacement of this limit, in his favor, through various artifices. An example of this intervention is the Leiria pine forest (planted long before the time of King Dinis, and now destroyed by arson, with no culprits in sight) which contained the dune progression towards the interior.

Usually, through ignorance or negligence, man intervenes in this balance, with adverse consequences for the natural environment, in the medium or long term, always harmful to his interests.

The extraction of sand on beaches or dunes, the implementation of constructions in these mobile buildings or the transit of people and vehicles are causes of undesirable situations, frequently reported and documented by convincing television images.

In old dunes, of Pleistocene age (old Quaternary), these bioclasts are totally or partially dissolved by the action of rainwater (carbon dioxide), which runs through its interior, characterized by high porosity. The dissolved calcium carbonate then reprecipitates, contributing, together with other factors, to the cementation of the sand grains, mostly quartz.

Thus, “consolidated dunes” or “fossil dunes” are formed, in which the grains are glued together through a film of calcium carbonate that surrounds them.

Close to Lisbon, in Oitavos, between Cascais and Guincho, there is a splendid consolidated dune, excavated on the east-facing side, allowing the detailed observation of the intersecting bedding, the porous character and the poor consolidation of this rock.

Other consolidated dunes are partially preserved on our coast, in Magoito (municipality of Sintra) and between Sines and Porto Covo, on the Alentejo coast. Forte do Pessegueiro (Porto Covo) was built from consolidated dune blocks (the local stone available).

The island of Porto Santo, in its central part, is covered by a sandy formation transported by wind, from a sandy beach. These eooleanites, as they can be called, because of the agent that transported them, are made up of essentially biogenic limestone sands generated on a carbonated platform, which developed there in the Miocene, under warmer climate conditions than the current one.

Móveis, on the dune fringe of the beach, to the south, these sands are more or less consolidated in the north of the island, in the region of Mornos and Fonte da Areia. Unlike the sands of mainland beaches and dunes, these sands do not contain quartz. Similar aspects, but on a smaller scale, can be observed at Ponta de S. Lourenço, on the island of Madeira.

Author AM Galopim de Carvalho is a geologist