Pedro Félix is ​​the author of the plays 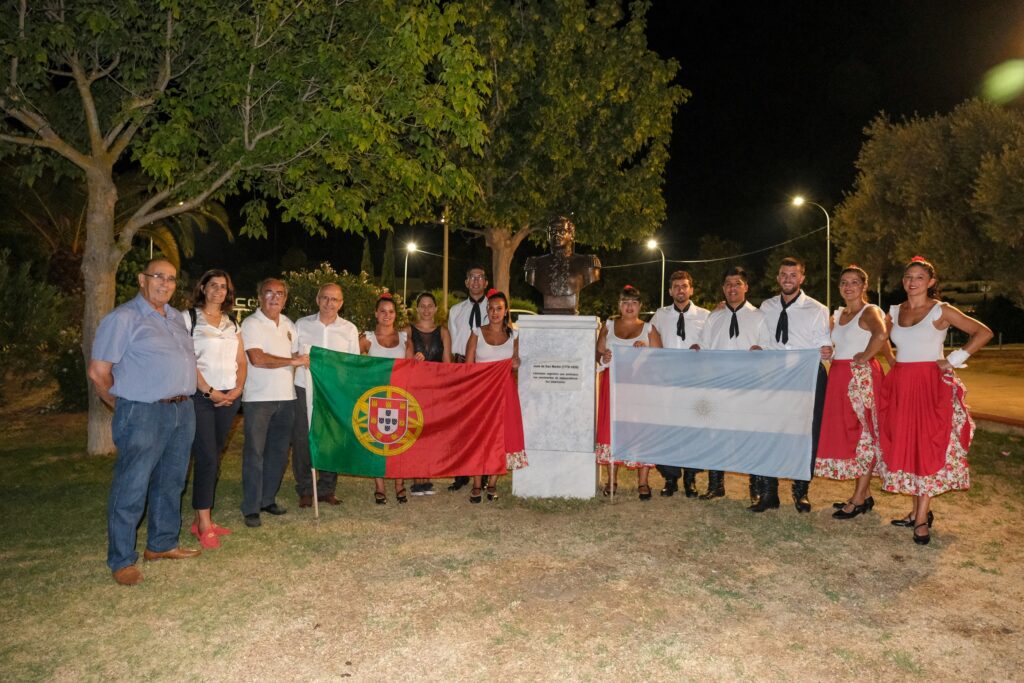 «The most Latin parish» in the municipality of Loulé – Almancil – already has two busts of Simón Bolívar and José de San Martín, two of the main faces of the struggle for independence in South America. The inauguration took place this Tuesday, August 2, at Jardim das Comunidades, in Almancil.

The moment was attended by hundreds of people from the Latin community of the municipality of Loulé, in a party where there was no lack of music, dance and even the anthem of Venezuela sung by those present.

Simón Bolívar and José de San Martín, the two great heroes of Latin American liberation, met on June 26, 1822, in Guayaquil, Ecuador, to discuss the course of projects for the emancipation of South America, in what became known as the Guayaquil Conference.

200 years later, on the 2nd of August of this year, in the village of Almancil, this “re-encounter” took place at the inauguration of the busts.

“They were two heroes, companions in the struggle, two people who fought for the liberation and independence of many Latin American countries. They dreamed of and materialized a value that must be cultivated and honored: freedom», underlined the mayor Vítor Aleixo.

Pedro Félix, author of the artworks, accepted the challenge of recreating the image of the two liberators.

The bust of San Martín was conceived from another sculpture offered by the Embassy of Argentina to the Municipality of Loulé, but also, through research, using images (paintings and engravings) and the only known original photograph of the general.

In the case of Bolívar, «it was easier because there are several references, including an image very widespread in Venezuela that shows what would be the true face of Bolívar», said the artist.

Both sculptures were made of clay, then passed to plaster and, finally, to a foundry for finishing in bronze, a work that «took about a year to execute». 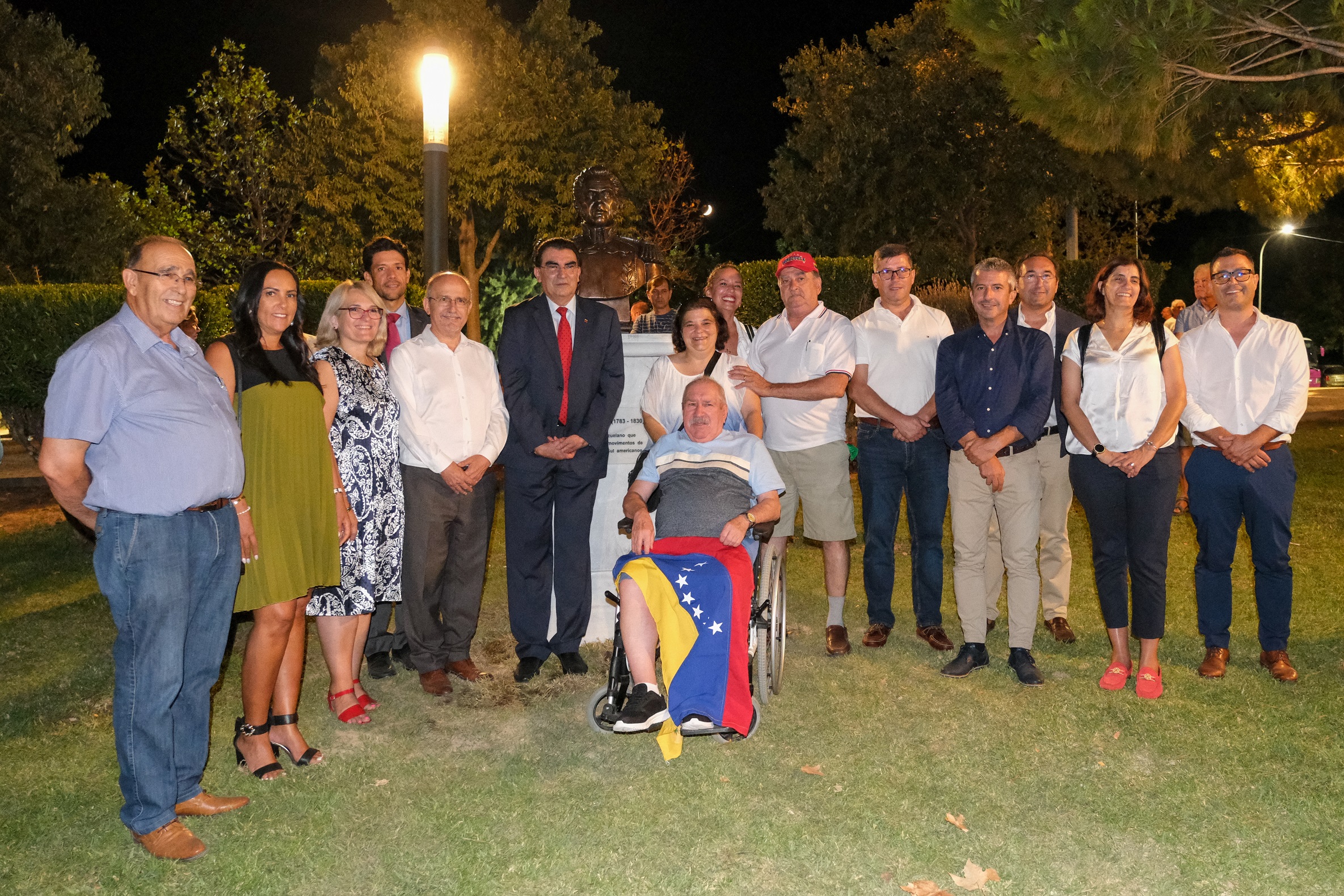 But if this initiative was intended to bring to mind two heroes who remain in the history of the struggle for the right to self-determination of peoples, they are also two figures with whom the Latino population identifies.

And in this sense, as the mayor of Loulé underlined, this is also «a tribute to the Portuguese who, one day, in search of happiness, of personal fulfillment that the homeland made difficult, sought to be happy elsewhere, namely in these two countries».

If the emigration from Loulé to Argentina is much older, dating back to the XNUMXth century and the first decades of the XNUMXth century, the migratory flow that left the municipality for Venezuela was later, hence the more thriving and numerous community of this country that resides especially in Almancil.

One of these emigrants is João Barros, the well-known “Barrinhos”, owner of a café in Escanxinas, where arepas, empanadas or cachapas are not lacking, but which is also a meeting point for the Portuguese-Venezuelans of this county and a space where they stay live the traditions of both countries.

It was his idea to take the image of the Venezuelan hero to Almancil.

«My dream came true, also thanks to the Loulé City Council. It was a lot of sacrifice, but we made it and I'm very happy", he said in tears and with the yellow, red and blue colors of the flag in his hand.

Lucas Rincón, ambassador in Portugal of the Bolivarian Republic of Venezuela, was present in this initiative.

«A fervent believer and builder of the great homeland, statesman, politician and military strategist, negotiator and diplomat who marked the path of independence and integration of the region to face imperialism and conquer the peace of nations and the right of peoples to sovereignty. He was a forerunner in generating relations between nations based on mutual respect, equality, justice and freedom for the oppressed”, said this diplomat.

José Carlos Madeira, representative of the Argentine community and responsible for the Portuguese Association of Comodoro Rivadavia, thanked the Municipality and spoke about the work and life of José de San Martin and the bicentennial of the “meeting of heroes”, in Guayaquil.

The Garden of Communities is thus “richer”.

«Today this is a welcoming land that gives this possibility to many emigrants and the first ones are naturally our compatriots who return here. This will always remain his native land», considered, in turn, the mayor of Loulé.

The night ended with music and dancing brought by Rancho Alma Algarvia of the Portuguese Association of Comodoro Rivadavia and the Grupo de Danzas Venezolanas Araguaney.

Who were the liberators?

Coming from an aristocratic Galician family, Simón Bolívar was born in Caracas, in 1783. A Venezuelan military and political leader, he was the first illustrious person to support decolonization in practice. He swore to defend the independence of South America when he was in Italy and dedicated his life to fighting the Spaniards.

He is considered by Latin American countries as a hero, visionary, revolutionary and liberator. During his short life, he led Bolivia, Colombia, Ecuador, Panama, Peru and Venezuela to independence, and helped to lay democratic ideological foundations in most of Hispanic America. After triumphing over the Spanish Monarchy, Bolívar participated in the founding of the first union of independent nations in Latin America, named Gran Colombia, of which he was President from 1819 to 1830.

José de San Martín was born in Yapeyú, in 1778. This Argentine general was the first leader of the southern part of South America who was successful in his effort for independence from Spain. He actively participated in the independence processes of Argentina, Chile and Peru.

San Martín is presented as a precursor of a Hispanist nationalism, aiming at representative democracy among Spanish-speaking peoples, which would include Spain, which sought forms of conciliation and negotiation instead of conflicts and wars.

Both fought for the political independence of America, but defended different political projects. Bolívar wanted the creation of a united Hispanic America, under a republican regime, while San Martín proposed the formation of new monarchies, mirroring the English political model.