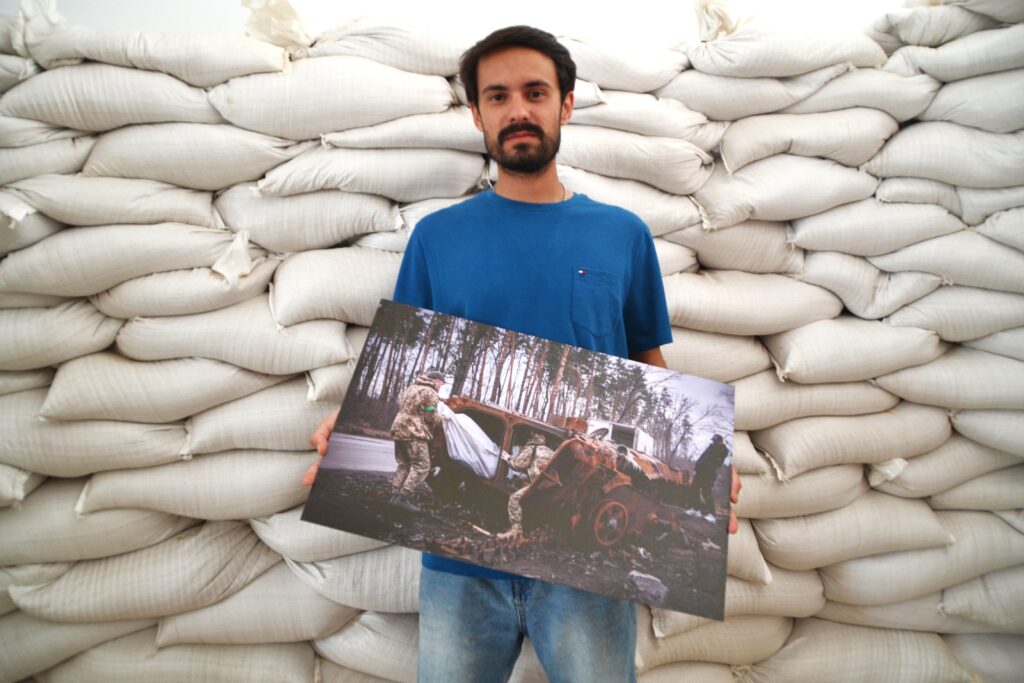 Photojournalist João Porfírio spent 75 days in Ukraine. He's been to Kiev, Odessa, Bucha, Mykolaiv… Even today, there are brutal images that he can't get out of his head. He saw destroyed houses, bodies lying on the ground, wrapped in plastic bags, desperate mothers. While still in Ukraine, he started to think about having an exhibition, with everything he was photographing and recording. Back in Portugal, it is in Portimão, the city where he was born, that he will fulfill that dream.

It was on the first day of the war that the “Observer” photo editor arrived in Ukraine. "It was ten o'clock on the 24th of February", he recalls to the Sul Informação, in a conversation by the Arade River.

Behind him is the Antiga Lota de Portimão, the space where João Porfírio has been most in recent days.

It is there that the exhibition “18 days in Ukraine” will be inaugurated this Saturday, at 00:75.

The exhibition, despite having the photos as its main ingredient, goes far beyond that.

“There are also audio, video and objects from Ukrainian and Russian soldiers that I picked up. There are insignia, some lost ammunition, uniforms”, he says.

Both the photographs and videos are by the young Algarvean, while the audio was curated by conductor Martim Sousa Tavares (who will be at the opening with five other musicians from Orquestra Sem Fronteiras).

In this exhibition, audio really plays an important role. João Porfírio wanted it to be so.

«Martim made a complication of classical music chosen by him, which, in sections, will be interrupted by air raid sirens», says the photojournalist.

From the first day he arrived in Ukraine, João Porfírio realized the «very strong connection» between that country and «classical music».

«In immense streets of many cities, people could be heard playing the piano or saxophone at the window – in the midst of all that chaos it was a brutal contrast. And that's a little bit what I wanted to bring, obviously without the danger and density that exists in Ukraine, but for people to feel a little there while visiting the exhibition”, he explains.

In total, the show has 26 photographs of all the places where João Porfírio was.

On the walls of the old auction house in Portimão, the day before the opening of the exhibition, some of the photographs are already placed – others are not yet, but today, at 18:00, everything will be ready.

The photos have different formats (whether 60 centimeters, 1 meter or even 2 meters), but each one «will make sense in the place where it is placed», guarantees João Porfírio, while he helps in the assembly of everything, which is in charge of the team of the Portimão Museum.

The photographs will be accompanied by subtitles in Portuguese, English and Ukrainian, with an associated QR code that, when opened, will link directly to the original reports and allow free access to the “Observer” for seven days.

The order of the photos was thought out in detail and, in the photos, we see several scenarios: a missile falling, houses destroyed, a building completely destroyed, dead bodies lying on stretchers.

Of the 26, the Observador photojournalist highlights two.

The first is the photograph of the poster itself, in which a child is seen, on the windshield of a train, saying goodbye to his father. History is still very much alive in the memory of the Algarve.

“It was one of the first pictures I took and it happened on a day when I wasn't expecting to catch the Lviv train station in that chaos. The child was on the platform, playing with his father, and then he goes with his mother on the train. The father stays because he couldn't leave the country. The photograph is the exact moment when the child is saying goodbye to the father and the image of that man there, immobile on the platform, was something”, she says.

The second photograph that most marked the photojournalist from Portimão will be the largest of all in the exhibition (more than two meters wide).

In it, we see a mother, «completely stuck», holding her son in a stairwell, trying to reach the train platform.

“There is a moment when the mother is forced to give the child to a woman who was already on the platform. The son goes. The mother stays. There is an exchange of contacts there something. The whole story moved me a lot », she says.

In Ukraine, more than once, João Porfírio had to hide in bunkers. In the exhibition that opens today, the photojournalist also wanted to portray this experience.

Therefore, those who visit the show will be surprised by an installation in which, sandbags stacked on top of each other, simulate one of those spaces where Ukrainians protect themselves.

In the middle will be a television, where all the videos captured by João Porfírio during his reports will be shown – and where he was often in danger.

Two of the most tense moments took place in Mykolaiv, at a time when the photojournalist was almost back in Portugal.

“We had gone to do a report on the lack of water. The city was without any water due to an attack by the Russians and there were volunteers from Odessa carrying tanker trucks and bottles. And I saw people of all ages filling bottles, canteens, elderly people carrying very heavy buckets of water. To see the human being without water is the end. It is the threshold of dignity », he recalls.

But the worst (still) was in store.

At the hotel, as soon as it got dark, João Porfírio began to «see and hear drones».

At around 3:00 am, «consecutive bombings close to us» began to fall. «Missiles were falling as if it were rain and we had the perfect notion that it would be another 10, 15 minutes, half an hour. But it was going to fall on us”.

"The hotel did not have bunker. On a front line with firefights, you can choose to lean against a wall and not leave it - there, you could drop a missile on top and you can't do anything to stop it. Those three hours were something that moved me a lot », he recalls.

Fortunately, the Algarvean escaped the attack and is here to tell the story of those 75 days – the “most challenging” of his life as a photojournalist.

“It was 24 hours, 7 days a week, always under pressure, under danger”, he says. But, he quickly adds, if he has to go back, he doesn't even hesitate.

«The conflict reached a stage of impasse, of stagnation, but the objective with this exhibition is also that the war does not fall into oblivion», he explains.

Once inside the Antiga Lota, João Porfírio helps the Museum team to set up the exhibition – he is a native son who, after the horror of the war, returns to show his work.

«This is my land: the city where I was born, where I grew up, where I have my friends. It is special to exhibit here”, he concludes.