Book presented this Friday, June 17, is now available for sale 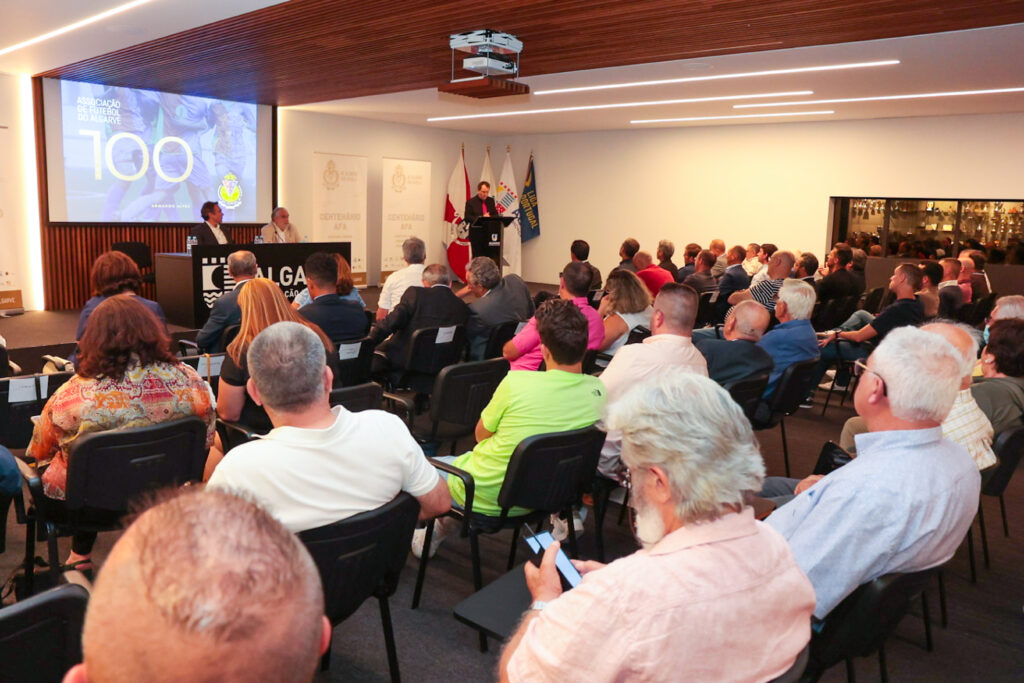 The book “Associação de Futebol do Algarve – 100 Years” was officially presented this Friday, June 17, at the Institution's Headquarters Auditorium, in Faro.

Reinaldo Teixeira, president of AF Algarve, Armando Alves, author, and Neto Gomes, guest speaker, spoke about the work of more than 400 pages to about 80 people who attended, among various entities in the region, representatives of local authorities, Regional of the Portuguese Institute of Sport and Youth, Portuguese Football Federation, Portuguese Professional Football League, similar associations, partners, members of the Board and current and former Social Bodies of AF Algarve.

“It's a pride to see the house full. This is what moves us and brings us closer and closer. Sport, more than what is competition on the field, is this family relationship that we create between all», highlighted Reinaldo Teixeira, who highlighted the role of affiliates and their sports agents over time.

«What this book wants to do is to mark this path in which, over these 100 years, so many men and so many women, in various clubs, in various Social Bodies, have made history and which today we try to reproduce through the collaboration of our author , to whom we are very grateful for his excellent work», stressed the chairman of the Board.

Armando Alves also took the opportunity to confess his feeling of «satisfaction and pride» for being linked, in book form, to “such a remarkable and beautiful moment in Algarve football». “We know today, with this book, more, much more, about the origins and past of football in the region. And, believe me, the more we know about the past, the more capable we will be to face the future”, said the author.

«This is not just a football book and it is a book about the entire Algarve, all the municipalities, all the parishes where a ball was ever played on a football field or in a pavilion. In fact, it turns out to be a book that goes far beyond the borders of the Algarve and encompasses a diversity of countries and continents, through players, teams or teams that played here or footballers, coaches and teams from the Algarve who played elsewhere», continued.

“A book is generally seen as a fruit. As something finished, the result of the work of its author and those who collaborated with him, and as a more or less static source of knowledge. I would very much like this book not to be just a fruit and become a seed, gaining a multiplying dynamic», concluded Armando Alves.

The book “Associação de Futebol do Algarve – 100 Years” is now available for sale. To find out how to purchase a copy, just contact AF Algarve via email comunicacao@afalgarve.pt.

It is recalled that the pre-launch of the book was held, among other initiatives, in a symbolic way, on the day of the 100th anniversary of AF Algarve, celebrated on the 22nd of January.