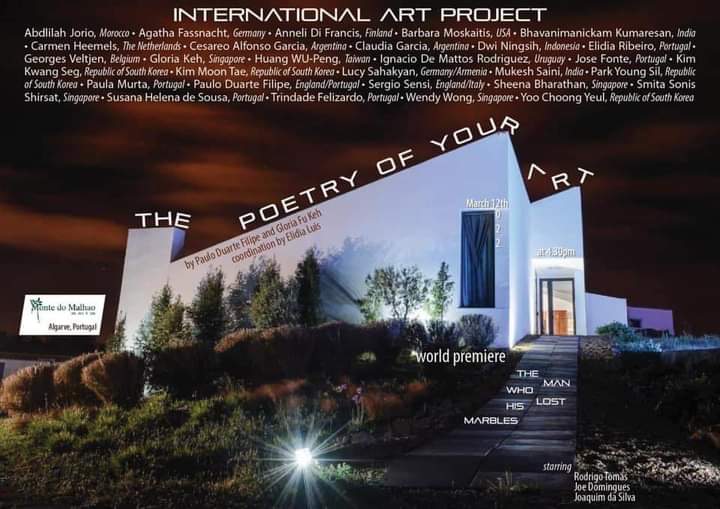 The artistic project «The Poetry of your Art», which brings together 16 countries from different continents, and which will be inaugurated in Monte do Malhão – Arte, Eco & Spa (Castro Marim), will serve the solidarity with the Ukrainian people. Visual arts and poetry will go hand in hand with immigrants residing in Sotavento do Algarve who are bridging the gap with the Ukrainian population victim of the war.

On the 12th of March (Saturday), at 16:00, the international exhibition of painting and poetry «The Poetry of your Art» will be inaugurated in Monte do Malhão.

«It is a project that unites dozens of artists who now, in Monte do Malhão, join the world cry for peace, appealing to the role of art to pacify and contribute to the awareness of the better development of societies, as well as it is linked to the group of immigrants in Sotavento do Algarve who are currently making every effort to help the victims of Ukraine», explain its promoters.

The artistic project, of independent production, arises from an original idea by Paulo Duarte Filipe (Portugal), in partnership with Gloria Fu Keh (Singapore) and with the coordination of Eli Ribeiro (Portugal), with works by 29 visual artists and poets, representing 16 countries from different continents (India, Singapore, Netherlands, United Kingdom, Germany, Argentina, South Korea, Portugal, among others).

This artistic project, which aims to «enhance the close and umbilical relationship between poetry and painting», consists of collaborations between poets who wrote poems inspired by the painters’ canvases and vice versa.

«The war provoked by Russia, in a repugnant attempt to occupy a sovereign country in the XNUMXst century, Ukraine, and all the humanitarian catastrophe it represents in the heart of Europe, brought us irreversible changes, and Peace and Solidarity are words that move us and must also be communicated through the union of artists», says Paulo Duarte Filipe, founder of “Pandemic Art”.

The artist travels from the United Kingdom to the Algarve to shout, on behalf of a wide-ranging and very heterogeneous collective that is in full harmony, to make his contribution in direct aid to the victims of the war triggered by Vladimir Putin.

«We could not be dissociated from this emergency that appeals to us in several facets as human beings: solidarity, but also activists and above all brothers. Each one expresses himself as he can and knows best. We do it for art, that is our weapon…», reinforces the artist.

Thus, through a production of Monte do Malhão in close contact with immigrants, during the inauguration essential goods will be collected for the victims (namely, food, medicines, clothes and toys), as well as information about the refugees who are on their way and who, upon arrival, will need all kinds of support: food, housing, health, education, employment, in the sense of peaceful integration, far from war.

A NIB of an official account of direct support to this cause will also be made available.

For Monte do Malhão, «all help is welcome and essential, in the certainty that this war in the heart of Europe demonstrates the vulnerability of all of us, and it is essential not to lose focus on peace and love between peoples ».

Considering that this action represents an act of civic duty, but also of love for others, the owners of Monte do Malhão call for «union between people in which empathy must be the master key of the heart».

On the 12th of March, there will also be a preview of the film «The man who lost the marbles», directed and produced by Paulo Duarte Filipe, with the participation of Rodrigo Tomás, Joaquim da Silva and Joe Domingues, being the music of Black Hawk. This feature film was entirely shot in Faro.

This action is part of Monte do Malhão's 2022 calendar, namely within the scope of the Ministry of Culture's «Guarantee Culture» project, which Monte do Malhão is running until September, as a result of the development of its «Art» strand, the from which, since 2012, it has carried out numerous cultural and artistic events, hosting several fine arts exhibitions.

Mentors of the international artistic project «The Poetry of your Art»

Paulo Duarte Filipe: poet, multifaceted artist and film director, lives in London, where he develops his artistic activity.
Awarded in various creative techniques, he is the founder of the worldwide art movement called «Pandemic Art», based in the United Kingdom.
This artistic current focuses on a new way of creating and alerts to the need to redefine art, taking into account the arrival first of a pandemic and after a war in Europe and the direct and collateral effects it caused in society in general, and artists in particular.
Paulo was also co-founder and president of Peace and Art Society (PAS) where between 2014 and 2016 he co-organized the international event «Minha Fukushima», which brought together around 170 artists from 110 countries against nuclear energy.

Gloria Fu Keh: is a renowned artist, awarded at numerous international events, having as her first and main mentor and teacher her father Martin Fu, a talented oil painter from Singapore.
According to his words, as he grows older, he prefers “more the comfort and quietness of solitude, painting being a form of meditation”, where he finds “inner peace” and recovers “energy”.

Elidia Luis: was the founder of «21 Arte Galeria», the first art gallery in Faro, continuing as director until 1982, having organized the 1st Bienal de Arte Contemporânea do Algarve.
An artist in constant search for new creative forms that reflect the times in which she lives, with special attention to environmental issues, Elídia belongs to the social bodies of Peace and Art Society (PAS) and is co-founder of «Pandemic Art», exhibiting her works regularly at national and international level.