Tonight there is a shower of stars in the sky

Find out what you can see in the sky in January 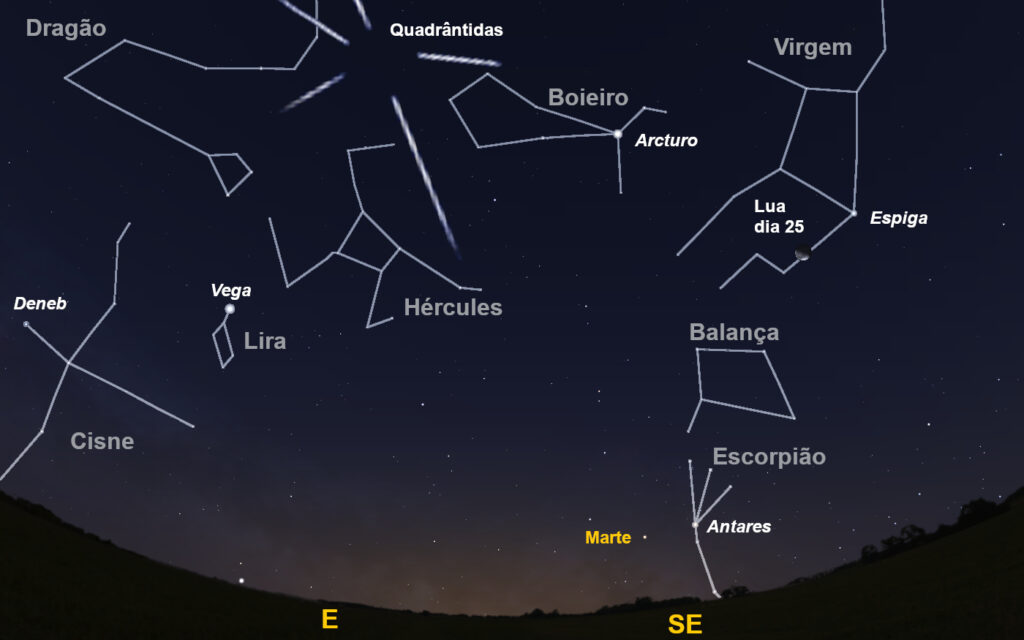 Southeastern sky at the end of dawn on day 4. Also visible is the radiant shower of Quadrantid stars and the position of the Moon on day 25. (Figures adapted from Stellarium)

New Moon will be the first significant ephemeris of 2022 and took place in the early evening of the 2nd.

On the night of day 3 to 4, there will be maximum activity from the Quandrant star shower. These are nothing more than rocks and dust that were released by comet 2003 EH1 that burn as they enter our atmosphere. Note that this comet is currently extinct, not having enough volatile materials to form a tail.

During the few hours that the peak activity of this meteor shower lasts, one would expect just over a hundred meteors per hour. Unfortunately, several factors such as adverse weather conditions and light pollution dramatically reduce the number of objects that can be observed.

At the end of this same morning (more precisely at 7 am), the Earth reaches the point of its orbit closest to the Sun: perihelion. This greater proximity to the Sun is not enough to compensate for the smaller amount of solar radiation reaching the Earth's northern hemisphere, due to the fact that, these days, the Earth's north pole is facing in the opposite direction to the Sun.

Early the following night, the Moon will be seen along with the planets Mercury and Saturn. At the end of the 5th, our natural satellite will be seen approaching Jupiter, the planet it will pass by during the 6th.

On day 7, Mercury reaches its greatest elongation (distance from the Sun) to the east. This planet will be visible at dusk until around the 20th. It only reappears a week later, but at dawn.

Likewise, Venus will be visible at dusk until the 5th, and will only be visible again from dawn on the 11th.

The Crescent Quarter will take place in the early evening of the 9th, making it an excellent time to observe the Moon at dusk. In turn, the Full Moon will arrive during the 17th and the Last Quarter on the 25th.

On the 22nd, we celebrate the thirtieth anniversary of the discovery of PSR B1257+12 B, an exoplanet that orbits the PSR B1257+12 pulsar. This discovery preceded that of the exoplanet 51 Pegasi b, which earned astronomers Michel Mayor and Didier Queloz the Nobel Prize in Physics in 2019.

Finally, on the 29th, the conjugation between the Moon and Mars will occur, and two days later it will have approached Mercury as it had already done at the beginning of the month. But while the first time this happened in the constellation Capricorn, this time it will be with the constellation Sagittarius.

Author Fernando JG Pinheiro is a researcher at the Department of Physics at the Faculty of Science and Technology at the University of Coimbra and at CITEUC – Center for Research on Earth and Space at the University of Coimbra. His fields of specialization include Astrophysics, Geomagnetism and Space Meteorology. In addition to his work as a researcher, he has already worked on the governing bodies of the Portuguese Society, and coordinated the Solar System Science group at CITEUC. Fernando Pinheiro is a regular contributor to scientific dissemination activities.