The construction of the D. Maria bridge in Santa Clara-a-Velha and the access to the Algarve 200 years ago 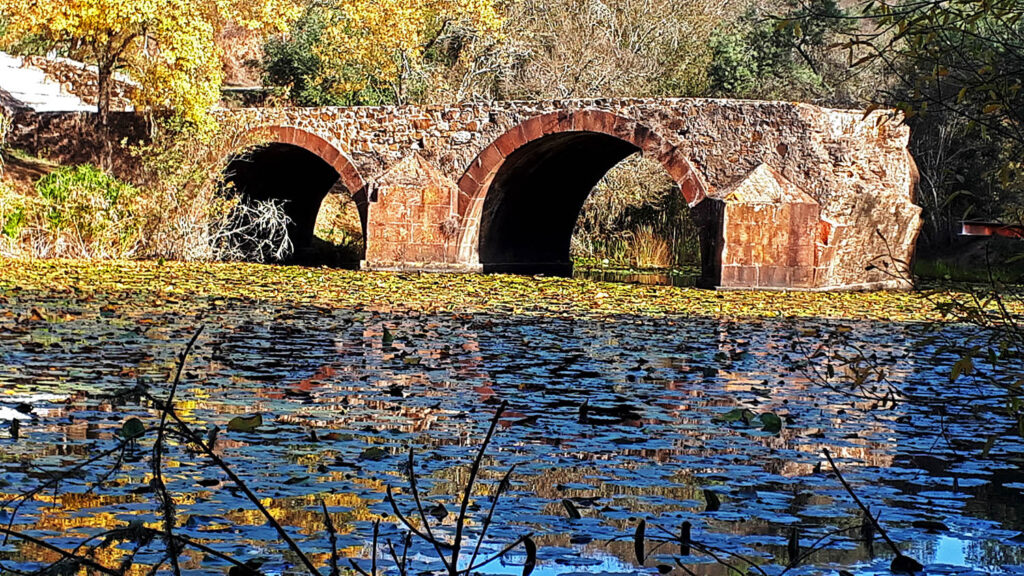 In the vicinity of Santa Clara-a-Velha, municipality of Odemira, on the way to the homonymous dam, there is a bridge in ruins called D. Maria. In the village, the chronology of construction differs and if, for many, the name is a tribute to the queen who promoted its construction, others attribute it to the Roman period.

If it is true that the justification for the designation is not easy, we are certain that the bridge was not built in the reigns of the homonymous queens, much less by the Romans.

The military pronouncement of August 24, 1820, which we have already mentioned, and the entire immediate period that followed it, namely the Constituent Courts and General Courts, generated an atmosphere of rejoicing in the majority of the Portuguese, since it was believed that stagnation that until then lived would soon be something of the past. A collective movement supported the regeneration of the country.

However, the issues addressed during this phase of Portuguese parliamentary life covered, it can be said, the entire panorama of national life. There were countless congratulations and representations from local authorities and also from anonymous citizens sent to the Courts.

It is in this sense that a request from the Chamber of Ourique for «the construction of a bridge over the River of Odemira, in the Parish of Santa Clara», then term of that county, fits in.

Although we did not have access to the request itself, it was found in the answer given by the Regency of the Kingdom to the judge from outside Ourique, who, inherently, held the presidency of the city council, on June 25, 1821.

Thus, we learn that “the huge expense that went into opening the road that communicates the Province of Alemtéjo, with the Kingdom of Algarve, through Serra do Caldeirão in the Parish of S. Martinho, was considered useless, because in winter the torrential River of Odemira interrupts the passage for successive days».

In the years 1794 and 1795, the aforementioned road had been improved, in the area of ​​S. Martinho das Amoreiras, then similarly term of Ourique, however it was recognized that, without a bridge in Santa Clara, the investment had been in vain, since the impetuosity of the Mira did not allow its crossing.

Therefore, its use was conditioned and, as such, it did not encourage the development of agriculture and commerce in the Alentejo and Algarve, as was intended.

Thus, «with the Regency very much in view of promoting the interests of the Peoples, from which the general good of the Nation results», he ordered «the Plan, and the budget for the work», or as we would say today, to prepare the project, to the major engineer António Eliseu Paula de Bulhões, in charge of similar works in the Alentejo.
In this sequence, in June 1821, the Regency made an official letter to the so-called judge from outside, asking the Ouriquense municipality to proceed with the auction of the works, and that «the price of the work, will be punctually satisfied, in proportion to the advance of it ».

But it did not stop there, with the same magistrate, councilors and other officials from that town participating, who, having analyzed the matter, also considered "for the communication of that Province with that Kingdom [of the Algarve], through the Serra do Caldeirão, there is not enough said Santa Clara bridge, but another one is needed over the Ribeira de S. Marcos, in the Termo de Silves, as well as the opening of the road, between these two bridges, and the concert of the same road in other places».

He then ordered António de Bulhões to proceed with the execution of the bridge project in S. Marcos, examine the state of the road between this village and Santa Clara, as well as take the necessary observations «so that it can be broken in the most appropriate place to avoid. the difficulty of the step, and the excess of expenses».

Finally, he still had to examine the road, «from the site of Ponte de Santa Clara to Freguezia de S. Martinho».

After all, the government wanted to "put these obstacles to an end, so that the Peoples can enjoy all the comforts that Agriculture and Commerce provide them, and of which they are deprived due to the lack of these Works", so the work should be implemented as soon as possible.

Let's say that the Algarve would have a «motorway» towards «Portugal».

It should be noted that this route was used by the Algarve people who, from the Albufeira area, traveled to the capital of the kingdom, or by those from Portimão and Lagos, who were heading to the interior of the Alentejo, as João Batista de Castro tells us, in the his «Roteiro Terrestre de Portugal», published in 1748. The distance of 36 leagues between Albufeira and Lisbon was restricted by the passage of six streams.

On December 1, 1821, in the presence of the plan and budget, the construction of the Santa Clara bridge was completed in Ourique, «for the shortest stretch».

This one amounted to 7 000 000 metallic réis and was carried out by Francisco Lopes do Rosário, from Faro. Bidder who requested the delivery of some capital, so that, on January 19, 1822, it was determined by the Regency to give the municipality the money so that that master would “receive small portions of money he needed for the advance of the work”.

It was stipulated that the cash should be delivered in three equal payments, one at the beginning of the work, another in the middle and the last one at its conclusion, provided that all contractual conditions are respected.

The Chamber was also obliged to give the Secretary of State “in every fifteen days an account of the advance of the work and if it corresponds to the amounts received”, in case of any deviation, or rather, corruption. The bridge, with four arches and corners in Silves sandstone, will have been completed that year.

As for the connection in São Marcos da Serra, over the Odelouca stream, it was not carried out and this was not unrelated to the dissolution of the Cortes and the dismissal of the government, following the coup d’état of «Vilafrancada», in May 1823. .

The counter-revolution triumphed and with it the regenerating spirit dissipated. If the bridge in São Marcos was not built, the road also remained unchanged, judging by the testimonies of Baptista Lopes in 1841, or of Charles Bonnet, nine years later.

The latter mentions that «there are only shortcuts, sometimes too rough and only passable on horseback», so «the pompous name of “royal road” should not be given as it is a simple path».

It was only in the late 1880s that the watercourse was crossed by the railway bridge, while the road infrastructure only materialized in 1965, more than 140 years later.

Now, as we have seen, the construction of the Santa Clara bridge is deeply documented, the designer and contractor are known and it is dated.

It is true that, as to the designation, we have not found a complete answer. But, probably because the road was fixed in 1794 and 1795, it was designated as D. Maria, in honor of Queen D. Maria I, in whose reign the works were promoted, a name that would extend to the bridge more than 20 years later and only testimony that would last the anthroponym.

However, the indomitable Mira and its energetic floods caused structural problems very early and led to the partial destruction of the bridge in the mid-29th century. On May 1955, XNUMX, the Eng.º Jorge Moreira bridge, built to the west of the village, was inaugurated and with it the primitive infrastructure was abandoned.

The ruins of the D. Maria bridge, which these days celebrate 200 years, remind us not only of a very important work (albeit incomplete, as the road and bridge in São Marcos were not completed), but also the union and tenacity of the majority of the Portuguese to regenerate Portugal, in that liberal triennium of 1820-1823.

Author Aurélio Nuno Cabrita is an environmental engineer and researcher of local and regional history, as well as a regular collaborator of the Sul Informação.

Note: In the transcripts, the spelling of the time was maintained.