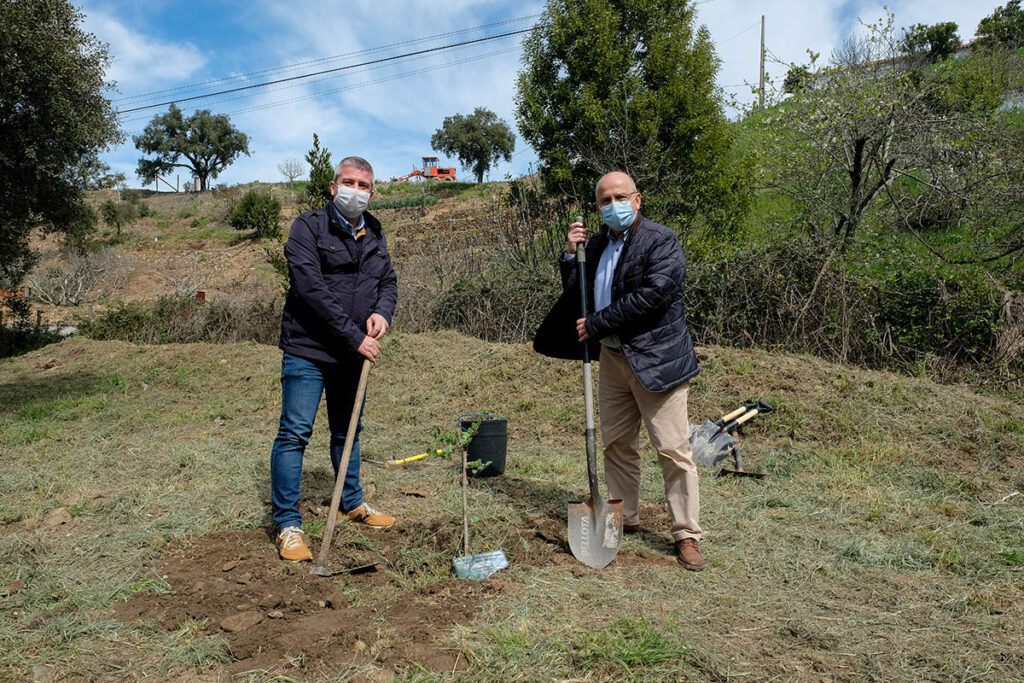 The symbolic planting of four trees, in the middle of Serra do Caldeirão, one of the main forest spots in the Algarve, was the way found by the Câmara de Loulé to commemorate the International Day of Forests, which is marked today, 21 March.

The planting took place last Friday, in the street of the former Cantoneiros House in Vale Maria Dias, parish of Salir, building where, from the month of April, expansion works will be carried out which will allow the creation here of the future Advanced Municipal Civil Protection Unit and the headquarters of Sapadores Florestais.

In this space, four native species were planted that are part of the Mediterranean landscape: almond, pomegranate, walnut and carob, the latter of great importance for the ecosystem, as it is one of the largest carbon sinks.

In a gesture full of symbolism, mayor Vítor Aleixo, accompanied by councilor Carlos Carmo and technicians linked to the Civil Protection, Environment, Climate Action and Green Spaces services, and municipal firefighters, put their hands on the ground to set an example the importance of taking care of the forest, a heritage that belongs to everyone and whose preservation will be decisive for the survival of the Planet.

“Through the promotion of plantation actions such as this one, Loulé continues to expand and reinforce its green patches, important centers for oxygen production and carbon dioxide fixation and absorption, one of the most responsible for the current problem of climate change” , said the mayor.

In recent years, “we have promoted the planting of thousands of trees in our territory, which is a good illustration of the response we want to give in terms of global warming that threatens our future. This is an initiative that has an added importance as it is one of the green lungs of our municipality that, over the years, has been buffeted by fires that have destroyed part of this natural heritage”, added the mayor of Loulé.

Regarding the space where the four trees were planted, the building that will soon function as the base of a Civil Protection detachment in the interior, Vítor Aleixo said that this equipment will bring added value not only with regard to surveillance and fighting forest fires in the Serra do Caldeirão, but also because it intends to give a pedagogical character to this space, creating here a center for the study and sharing of knowledge in matters related to the environment and the biodiversity of the local flora and fauna.

Over the years, the Municipality of Loulé has commemorated the International Day of Forests, either with planting actions in schools or with the offer of tree and shrub species to the population.

But, in this moment of pandemic, «those initiatives were not possible», so the local authority opted for a more restricted moment, «but with the same importance as regards the valorization of the Forest».