28 migrants who landed in Deserta have already been intercepted

This group disembarked this Tuesday, in Deserta, ending up fleeing across the sand 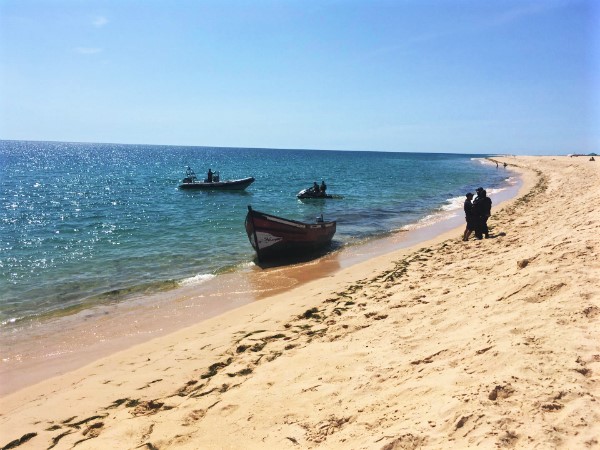 28 migrants have already been intercepted by the authorities, of the group that arrived this Tuesday, 15th of September, in Ilha Deserta (Faro).

Speaking to RTP, Rocha Pacheco, commander of the Southern Maritime Zone, said that "we have already managed to gather 28 people" and that "the searches are continuing to see if there is still anyone else on the island".

According to the GNR, of the 28 migrants, 24 are men, three women (one of them pregnant) and there is also a record of a 14 year old.

This group, which will have around 30 people, landed at around 13:30 pm this Tuesday, in Deserta, ending up fleeing along the sand. The alert was given through the 112 emergency line.

The Maritime Police "committed various means", having already intercepted, in addition to the migrants, the vessel they were coming in, which was abandoned and is "similar to those that have been used in the last landings" of migrants.

«We are talking about an island and there is no way out, other than by nautical means. We believe that we will be able to bring them all together», said commander Rocha Pacheco.

As for the health status of the migrants, there are no "signs that anyone has problems".

The ages are still unknown, as well as the origin of this group, it is believed, however, that it may come from Morocco.

In recent months, this is already the sixth attempt to land migrants from North Africa intercepted on the Algarve coast.

on June 15th, a group of 22 men, supposedly of Moroccan nationality, landed on the beach at Vale de Lobo. Days before, on June 6, another boat with 6 migrants, who also claimed to be Moroccans, had already been intercepted inside the Ria Formosa.

On January 29th, the same thing had happened, with a vessel with 11 migrants, coming from El Jadida, a Moroccan coastal town, who were caught in front of the Barra da Armona.

The first group of Moroccan migrants had arrived in the Algarve on the 11th of December, when 8 young people who also claimed to come from El Jadida (the former Portuguese Mazagão) landed on the beach of Monte Gordo, where they were intercepted by the authorities.