Discover the exotic in the Universe 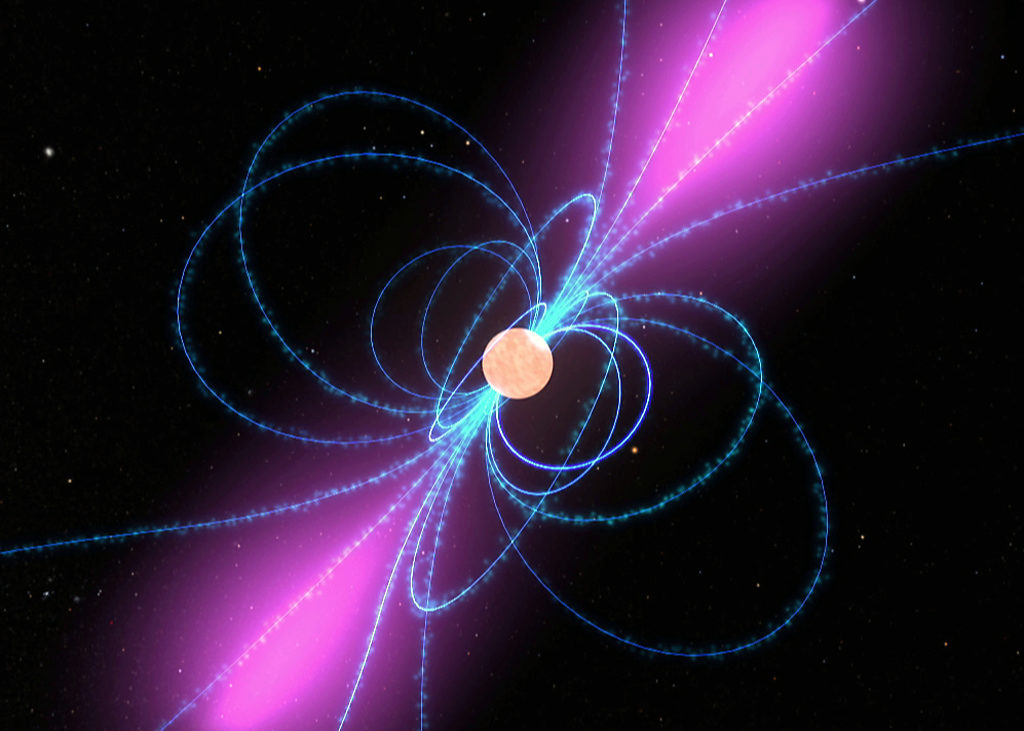 Attention to detail led astronomer Jocelyn Bell to confirm the existence of one of the most exotic and important objects in astronomy: the neutron stars.

A certain "noise"
Born in Northern Ireland in 1943, Jocelyn Bell studied Physics in Glasgow, Scotland. In the early 60s, he began his doctorate at Cambridge.

With colleagues, he built a new radio telescope at the Mullard Radio Astronomy Observatory. Apparently a field of piles connected by wires, this new equipment was intended to detect intense radio sources, called quasars, which today are known to be very bright nuclei of distant galaxies.

Once its construction was completed, Jocelyn Bell's work consisted in obtaining and analyzing the radio emissions record from the celestial vault, records that generally filled about 300 meters of paper strips daily.

The signs that the astronomer was looking for were far more intense than a certain “noise” that caught her attention. It was a very fast pulse, with a period of 1,34 seconds. The signal was so subtle that his own PhD advisor, Anthony Hewish, was willing to ignore it.

Bell ruled out the possibility that it was an artificial interference originating from the Earth, as it persisted for months and followed the apparent motion of the stars. The hypothesis of an extraterrestrial contact was also rejected, as Bell discovered, however, in other directions of the sky three more point sources on the radio with the same characteristics: pulsations from a fraction of a second to a little more than a second.

Bell and Hewish then began to wonder what kind of astronomical object might be the source of these signals. One thing was certain: by the laws of physics they couldn't be stars. Such rapid variations in radiation emission would have to come from objects much smaller than stars.

The indication of a possible explanation came when, in 1968, a source of the same type was detected in the Crab Nebula, in the constellation Taurus. This nebula consists of the remains of a star whose explosion (“supernova”) was observed and recorded by astronomers in 1054.

the remains of the stars
Astronomers now know that supernovae are how certain stars end their lives, depleted of the energy that made them glow for millions, if not billions of years. However, until the 1920s, only one type of stellar “corpse” was known, the so-called “white dwarfs”.

Once the pressure of the energy produced inside the star is extinguished, matter collapses under the effect of gravity, with nothing to oppose it. The result is a small and very dense body. In general, white dwarfs are bodies with a mass similar to that of the Sun, but compacted into a body comparable in size to the Earth. Due to their small size, the thermal energy they still conserve gives them a white color, as they are still very hot.

Until the third decade of the XNUMXth century, it was thought that white dwarfs were always the final stage in the life of stars, regardless of their size. Even the biggest stars would expel most of their material into space, reducing themselves to a white dwarf.

In 1930, Indian astrophysicist Subrahmanyan Chandrasekhar, who studied in England before settling in the United States, calculated that the physical process that prevents white dwarfs from collapsing further is only applicable to those with a mass less than 1,44 times the mass of the Sun. For more massive bodies, there is an even greater gravitational collapse and we are then in the presence of another object.

In 1933, Fritz Zwicky and Walter Baade, in the USA, were working precisely on stellar explosions of the 'supernova' type. Inspired by the recent neutron discovery, they proposed that these explosions would leave behind a body so dense that its pressure would be enough to fuse the protons and electrons, converting them into neutrons.

A "city" of neutrons
A "neutron star" would be only a few dozen kilometers in diameter, the equivalent of a large city, but would contain more than twice the mass of the Sun. Such exotic objects, as small and much denser than white dwarfs, if if they existed, they would, however, be impossible to detect with the technology of the 30s.

This has not stopped theoretical scientists from trying to describe the characteristics they should have. A star, which will originally have more than a million kilometers in diameter, with its speed of rotation and its magnetic field, will, by reducing itself to a body only tens of kilometers in length, by the laws of conservation of physics, pass to have a vertiginous rotation speed and a very powerful magnetic field.

If this axis, in turn, is not aligned with the neutron star's axis of rotation, the beams will sweep space like a farol. If by coincidence the Earth is in the scanning field of one of these beams, we will see a flicker, just like a farol, but with the same period as the star's rotation, on the order of a second, or even less. This is what Jocelyn Bell found during her Ph.D., three decades after Zwicky and Baade presented their hypothesis.

In 1968, Anthony Hewish and Jocelyn Bell published an article in the journal Nature in which they argued that the radio emission sources they were looking at could be explained as neutron stars with a beam of radiation falling on the Earth at each cycle of rotation. A journalist gave them the name 'pulsar', that is, 'pulsating star', a pulsating star (although in fact the star does not pulse – its size does not vary – but only varies the electromagnetic emission that reaches the Earth).

Although Jocelyn Bell was the second author of the article, in 1974, Anthony Hewish and a colleague of his received the Nobel Prize for Physics for this discovery, without Bell being included in this recognition. There was criticism from the scientific community of this decision. Yet Jocelyn Bell modestly argued that prestige was too high for a doctoral student. His advisor recognized, however, in the Nobel speech, Bell's dedication and attention to detail as fundamental to the discovery.

Exotic…and popular objects
Neutron stars are one of the most productive astrophysical objects. They have been used to confirm predictions from Einstein's Theory of Relativity, including the first indirect detection of gravitational waves in 1974 (which led to the second Nobel Prize for Physics involving pulsars in 1993). In August 2017, already in the era of gravitational wave observatories, such as LIGO, the first collision of two neutron stars was detected.

The Pioneer 10 and 11 probes, which are now on the threshold of the Solar System, each carry a plaque with a map representing 14 pulsars that, like lighthouses in the cosmic ocean, could help a potential extraterrestrial civilization find the place of the Earth. Solar System in the Galaxy.

Also in music, neutron stars have left their mark, as on the cover of Joy Division's 1979 debut Unknown Pleasures, based on a visualization of the rhythms of the first pulsar discovered by Bell, a visualization produced by a PhD student in 1970 In 1976, eight years after the Hewish and Bell article, the musician Vangelis published the Pulstar theme in the album Albedo 0.39, a theme that was used, among others, in the documentary series Cosmos, directed by Carl Sagan.

Jocelyn Bell has devoted part of her career to supporting young female students as well as PhD students from underrepresented communities in physics, inspired by her own experience as the only student enrolled in the Physics course in Glasgow. To these causes she awarded the $2018 million special Breakthrough Prize in Fundamental Physics, which she received in XNUMX.

"Stars that shine in time” is a rubric with which the Institute of Astrophysics and Space Sciences associates itself with the celebration of 100 years of International Astronomical Union (IAU), recalling important figures in the history of astronomy over the past 100 years.

Author Sérgio Pereira is a Science Communicator at the Institute of Astrophysics and Space Sciences, where he plans and produces content, events and projects with the aim of involving society in science and technology linked to Space and the Universe.
He holds a master's degree in Science Communication with a specialization in magazine journalism and initial training in Communication Design. He worked for several years developing web solutions for digital communication agencies.