A journey through the Algarve, 150 years ago, with the «Guide du Voyageur en Espagne et en Portugal» 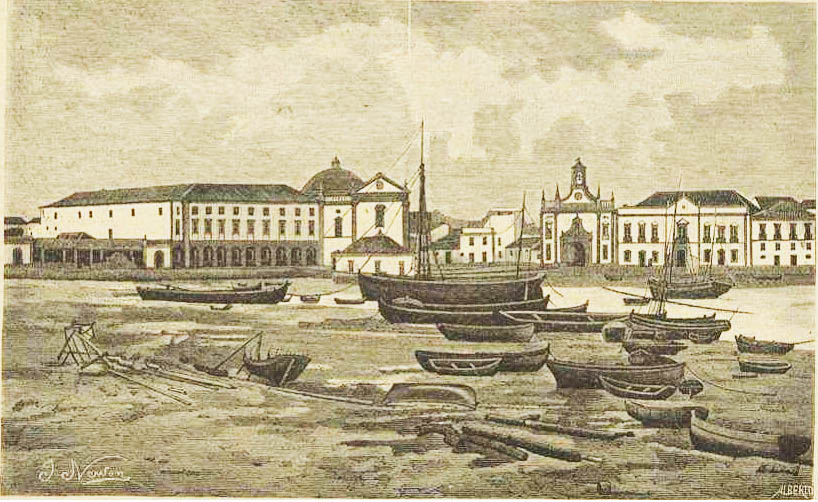 Summer is, nowadays, synonymous with holidays and with them travel and the beach. We have already recalled here that the Algarve's beaches only began to be visited in the first decades of the XNUMXth century. Before, bathing in the sea did not attract people to the southern province.

In fact, there was no frequent “passage of strangers” through the region, as mentioned, in 1841, by the lacobrigense João Baptista Lopes, in his “Corografia do Reino do Algarve”.

Despite this reality, the Algarve was already included in European travellers' guides, such as the one published in Paris, by Richard et Quétin, in 1846, entitled «Guide du Voyageur en Espagne et en Portugal», in an edition by L. Maison.

Written in French, the cosmopolitan language of the time, the book aimed to fill a gap, to enlighten all those traveling for business or entertainment, after all, «nations felt the need to get to know each other; to get to know each other, it is necessary to visit or establish reciprocal relationships, and the only means of achieving this objective are through travel and commercial exchanges», as the authors wrote.

The guide had, therefore, the purpose of indicating «the productions and industry, the monuments and the arts, the customs and natural curiosities of a country».

With around 400 pages dedicated to the Iberian Peninsula, it reserves only 70 for Portugal and just over two for the Algarve. Truth be told, the cover only refers to "Espagne", only the full title appears on the inside.

If many expressions and words are presented with the corresponding translation from French to Spanish, to Portuguese this does not happen. Portugal was distant and peripheral, even to the French, and unlike today, it was definitely not in fashion. 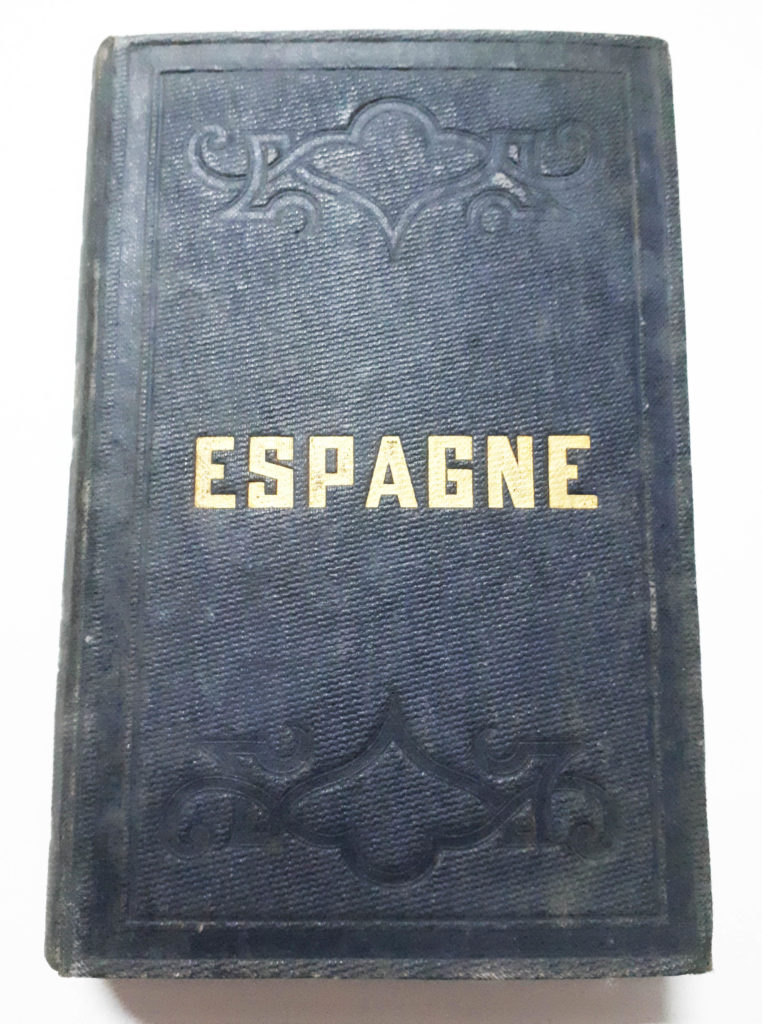 But let us return to the almost bicentennial guide. For Spain, 71 itineraries are presented, while for Portuguese lands only 11, which do not fail to cover the entire country. Routes that, to be sure of the introduction, did not forget “not a road, whatever its importance […], nor a city, nor a village or a notable place (…); the description not only of the buildings and natural curiosities, but also of the customs, the customs of each locality, as well as the agricultural or industrial products, will be described with care and in agreement with the best authorities».

The journeys were carried out by road, it should be remembered that the railway only arrived in Portugal in 1856 and, in the Algarve, 33 years later. For this reason, the guide warned that, in the country, there were few good roads.

Travelers with greater means could rent a car (two-wheeled carriage, pulled by two mules, and two-seater), while the less well-off had at their disposal almocreves (messengers, who drove in mules, dispatches or goods from a place to another), or they could even travel on a donkey, which they would easily find in the villages.

Also, in the case of the muleteers, the customer should always pay them for food, regardless of the price agreed for the trip.

The latter should be carefully fixed, being advised to show little enthusiasm and great firmness, as muleteers were often inconvenient, and angered travelers.

Another piece of advice to the tourist, as we would say today, was linked to the need to travel armed, especially in the border areas, although it was noted that Portugal was safer than Spain, smugglers were identified as being as dangerous as professional thieves . 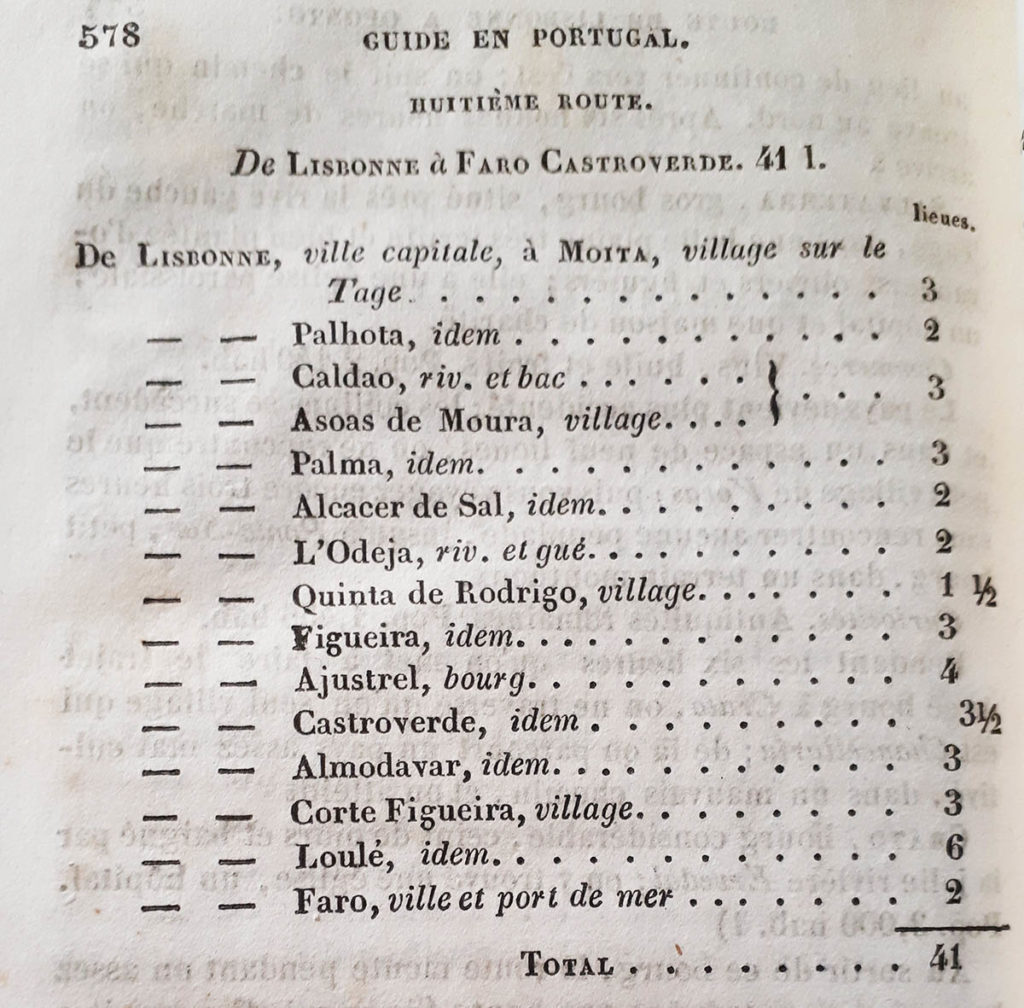 Three of the itineraries proposed in the «Guide du Voyageur en Espagne et en Portugal» cross the Algarve: from Lisbon to Faro, by Castro Verde; In Faro to Castro Marim, for Tavira; it's from Faro to Lagos.

The journey from Lisbon to Faro, by Castro Verde, covered 41 leagues. After leaving the capital of the kingdom, the passenger landed in the small village of Moita, where the inhabitants devoted themselves to fishing and agriculture, products that they later sold in Lisbon.

Next, travelers would find beautiful plains covered with olive trees, vines and wheat; along the water lines, the vegetation did not wait for man's hand, the plants of equatorial climates grew of their own accord, as if they accused him of his negligence and ignorance.

Villages were even rarer here than on the roads in the north and center of the country. The first and most important place on the route followed, from small and insignificant villages, was Aljustrel. A place that seemed very populated, in a beautiful valley at the foot of the mountains.

Three hours later, without villages and crossing beautiful plains, you reached Castro Verde, a small village with 2100 inhabitants, where, on the Ribeira de Cobres, the traveler could catch very good fish. As curiosities, in Castro the church and the beautiful hospital were listed.

The route went to Almodôvar for three hours, without finding any sale, just crossing fertile but poorly cultivated plains. “This is what is offered to the eyes of the traveller”, concluded the knowledgeable guide.

Almodôvar was considered an admirable town, due to its picturesque location in a beautiful valley, at the foot of the Serra do Caldeirão, with a population of 2500 inhabitants.

From then on, the route was made in the Algarve mountains, stopping at Corte Figueira (Santa Cruz parish, Almodôvar). An unimportant village, but indispensable for renewing provisions, after all it was “necessary to walk for six hours without being sure of finding something to eat to Loulé”, six leagues later.

«Loulé, a large town in the Algarve province, situated on a hill covered in wood and on the edge of a mountain that contains a rich silver mine. Not far away is another copper mine. There are several churches in Loulé and a hospital. Population 8250 inhabitants'. The reference to a silver mine in the vicinity of the locality is curious, today it is unmistakable that of rock salt, but then it was not even in a dream.

The next stop, after traveling 2 leagues, was Faro, which was reached by a gentle slope, after magnificent slopes. Described as the main city, seat of county and bishopric, it was situated on a rich plain, at the mouth of Valeformoso, «a beautiful river that rises not far from there, on the southern slope of the Serra Caldeirão, and flows into the ocean, where it flows. forms the port of Faro».

Well built city, with beautiful streets and surrounded by walls. As curiosities, the cathedral, described as vast and of good architecture, the beautiful square, the parish church, simple and noble, the college, the seminary and the hotel, were listed.

The port, considered safe, was defended by a citadel. Regarding trade, there was a large export of oranges, sumac, cork and dried fruits. Small cabotage and fishing were important. The population was 7600 inhabitants.

the course of Faro Castro Marim covered 8,5 leagues: five to Tavira; one more to Cacela; and then 2,5 until the end of the course. «Leaving Faro, we traveled on the southern slope of the long chain of mountains that share the provinces of Algarve and Alentejo, the road, although not very good, is pleasant because of the beautiful views we enjoy. The five hours we have to cover the distance between Faro and Tavira flow very quickly». 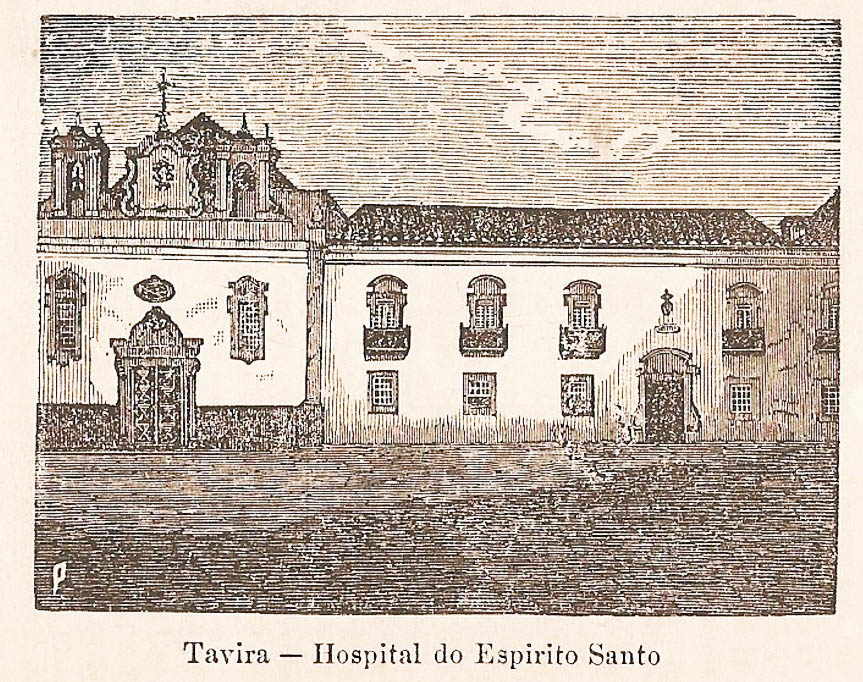 In the Algarve, as is well known, the civil government was headquartered in Faro, so that information was out of date.

The “Algarvian Venice”, located close to the ocean, had a small port that admitted medium-sized boats. It had a beautiful cathedral church, two parishes, six convents and several nursing homes. As curiosities, the cathedral and two churches were indicated, while in the industry there was evidence of fishing and the export of "good" white wines. The population was 8650 inhabitants.

The old castle was listed as a point of interest. In industry, fishing and salt production stood out. With the border town, the route through the Eastern Algarve ended. 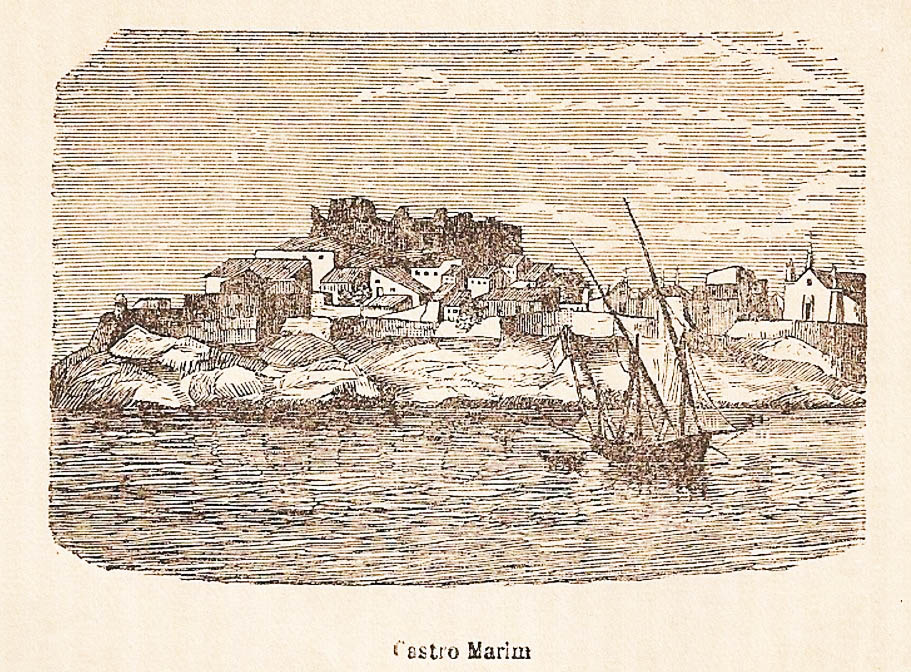 However, even shorter and succinct was the Barlavento script.

Between Faro and Lagos measured 10,5 leagues: 4,5 to Albufeira; four to Vila Nova de Portimão and finally two leagues to Lagos.
With 3000 inhabitants, Albufeira was a large town, located on a bay that could admit large boats, the port being defended by strong batteries.

In terms of industry, fishing and cabotage stood out. The road offered the same aspects that had already been covered.

Then you reached Vila Nova de Portimão, “a small town” with fortifications and a beautiful location at the mouth of the small river of Silves. After two hours of journey, the traveler entered Lagos.

An ancient city, whose foundation was attributed to the Carthaginians, its location «could not be happier: a beautiful bay, vast and deep, forms a port capable of receiving large tonnage boats».

He noted the presence of several churches, although he considered them "not very remarkable". But he referred to the city as the place of residence of the governor of the province, which, as mentioned, no longer existed. In industrial terms, it listed cabotage and fishing, without forgetting that the surroundings provided very famous wines. 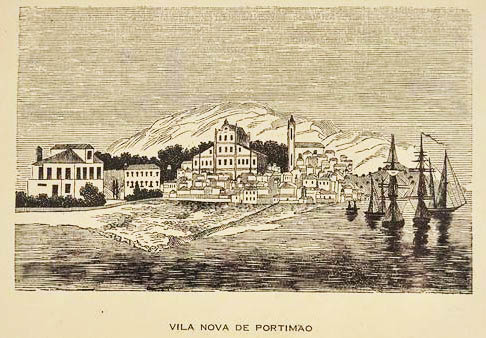 In the lands of Lacóbriga, the tour of the Algarve ended. While it is true that the main locations were included in the guide, there are two notable absences: Silves and Vila Real de Santo António.

The first, in spite of being a town, was a small village, which the cork industry had already begun to transmute in those years, albeit in a small way, however endowed with a large castle and a citable cathedral.

As for Vila Real, a royal foundation, an Enlightenment city, it had been erected just 70 years earlier and perhaps for that reason omitted. On the other hand, also Monchique and its Caldas, as well as Sagres, were ignored.

Although separated by more than 170 years, the Algarve today retains reminiscences of these descriptions. It is true that trips are much more comfortable and faster today, the discomfort of traveling on the back of a mule for four days, or even more, between Lisbon and Portugal is unimaginable. Faro, in the sun or rain. Also the communication routes and vehicles are, comparatively, excellent.

However, the location of the towns and cities, the landscapes, the salt from Castro Marim, the fishing, or even the good wines of the region remain unchanged. And if, then, there were few or non-existent tourists who visited Portugal and the Algarve, in particular, today there are thousands who visit and travel through one of the most cosmopolitan regions of the country. 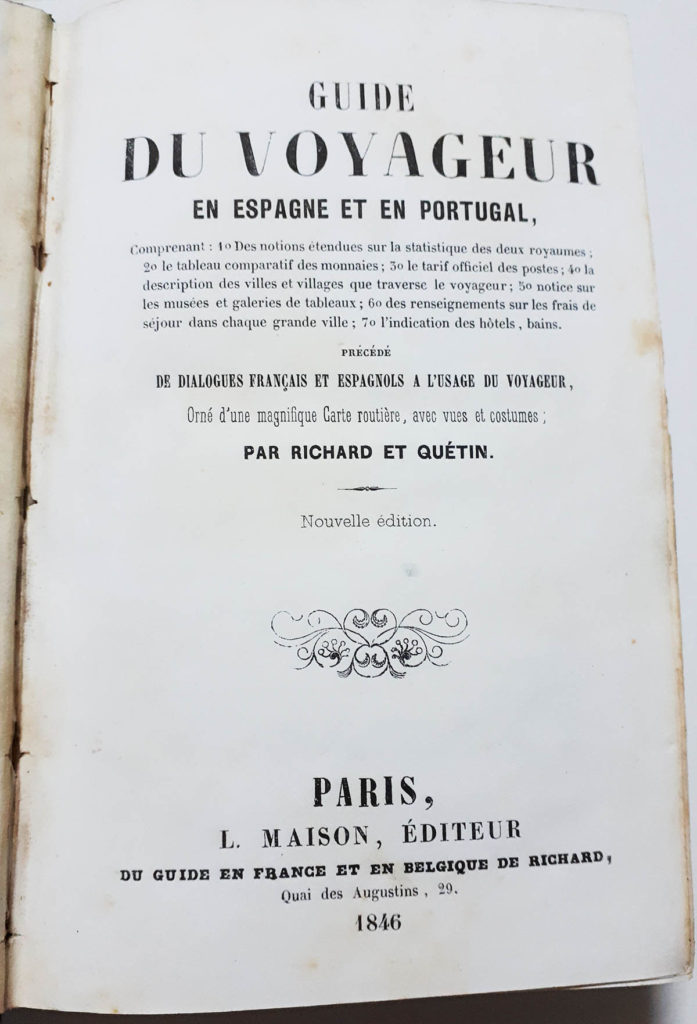 Author Aurélio Nuno Cabrita is an environmental engineer and researcher of local and regional history, as well as a regular collaborator of the Sul Informação

Note: Quotations result from free translation. The guide does not contain images, the engravings used are from the XNUMXth century and are merely illustrative.