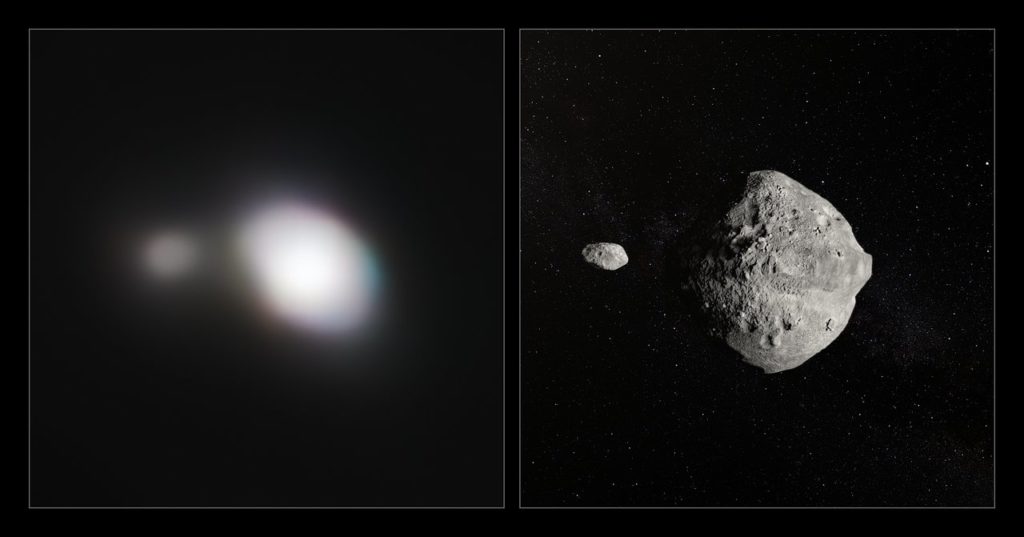 The unique capabilities of the SPHERE instrument, mounted on the Very Large Telescope (VLT) of the European Southern Observatory (ESO), of which Portugal is a member, made it possible to obtain very clear images of a double asteroid that passed close to Earth on 25 May.

Although this asteroid is not a dangerous object, scientists took the opportunity to test responses to objects of the same type that could pose a threat to Earth (Near Earth Objects), thus showing that ESO's cutting-edge technology can reveal itself critical in the defense of our planet.

The International Asteroid Warning Network (IAWN) coordinated an observation campaign, involving several organizations, of the 1999 asteroid KW4 as it passed close to Earth, reaching a minimum distance from our planet of 5,2 million km [1] on May 25, 2019.

The 1999 KW4 is about 1,3 km in size and poses no danger to Earth. Since its orbit is well known, scientists were able to predict this pass and prepare an observation campaign.

ESO joined the campaign with its flagship infrastructure, the Very Large Telescope (VLT). The VLT is equipped with SPHERE — one of the few instruments in the world capable of obtaining images sharp enough to distinguish the two components of the asteroid, which are about 2,6 km apart.

SPHERE was designed to observe exoplanets; its state-of-the-art adaptive optics system corrects atmospheric turbulence, giving us images as sharp as if the telescope were in space. The instrument is also equipped with coronagraphs that dim the stars, thus making it possible to observe the faint exoplanets that orbit them.

Taking a break from his usual nocturnal exoplanet hunting job, the 1999 KW4 observations obtained by SPHERE provided data that helped astronomers characterize the double asteroid. In particular, it is now possible to know whether the smallest asteroid has the same composition as the larger object.

“This data, combined with all others obtained by the various telescopes of the IAWN campaign, will be essential for evaluating effective asteroid deflection strategies, in the event that we encounter one of these objects on a collision course with Earth,” explains ESO astronomer Olivier Hainaut.

"In the worst case, this knowledge is equally essential for predicting how an asteroid would interact with the Earth's atmosphere and surface, thus allowing us to mitigate damage in the event of such a collision."

“The double asteroid passed through Earth at a speed of 70 km/h, which made observations of the VLT quite difficult,” said Diego Parraguez, who operated the telescope. The astronomer needed to use all his skills to be able to aim the telescope at the fast asteroid and capture it with SPHERE.

Bin Yang, astronomer at the VLT, stated: “When we saw the asteroid in the images corrected by adaptive optics, we were very excited. At that moment we felt that all the difficulties and efforts had been well worth it”.

Mathias Jones, another VLT astronomer involved in these observations, spoke of the difficulties felt. “The weather conditions were a bit unstable. Additionally, the asteroid is relatively faint and moves very quickly across the sky, which made observations very difficult and caused our adaptive optics system to crash several times. It was extraordinary to see that in the end all our work paid off, despite the difficulties!”

Although it poses no danger to Earth, the 1999 KW4 is very similar to another binary asteroid system called Didymos that could pose a threat to Earth in the distant future.

Didymos and his companion “Didymoon” are the target of a future pioneering planetary defense experiment. NASA's DART spacecraft will collide with Didymoon in an attempt to alter its orbit around its big brother, in a test designed to determine the feasibility of asteroid deflection.

After the impact, ESA's Hera mission will in 2026 observe the Didymos asteroids in order to obtain their characteristics, including the Didymoon mass, its surface properties and the shape of the DART impact crater.

The success of such missions depends on cross-organizational collaborations and the tracking of Near Earth Objects is a key point of collaboration between ESO and ESA. This cooperative effort has already taken place since the first successful follow-up of one of these potentially dangerous objects, which was carried out in early 2014.

“We are delighted to be able to play a role in defending the Earth against asteroids,” said Xavier Barcons, Director General of ESO. "In addition to using the sophisticated capabilities of the VLT, we are also working with ESA to create prototypes for a large asteroid detection, tracking and characterization network."

This recent encounter with the 1999 KW4 takes place a month before Asteroid Day, an official United Nations day for asteroid education and awareness, which will be celebrated on June 30th.

There will be events taking place on five continents and ESO will be among the top astronomical organizations participating. ESO's Planetarium & Supernova Visitors Center will offer visitors a wide variety of activities on asteroids that day, and the public is already invited to participate in these celebrations.