Our Cellular Energy Factory and the Chemical Elements 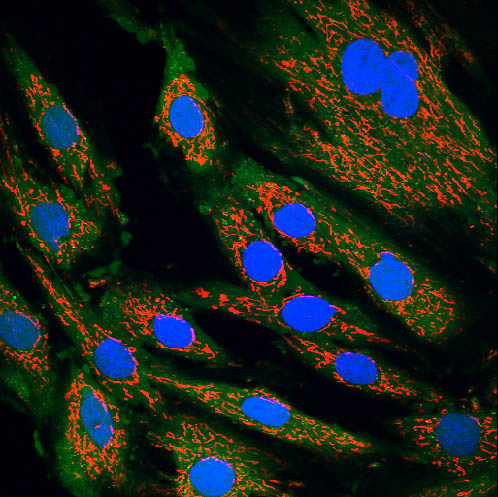 In 2019, the 150th anniversary of the Periodic Table of Chemical Elements is celebrated, initially proposed by the Russian scientist Dmitri Mendeleev and which continues to be revised and expanded today.

The Periodic Table is, in its essence, the catalog of all chemical elements known to mankind, a kind of display of the Lego pieces we have available to form more complex structures, and molecules for the most varied purposes, from the oxygen we breathe , to a granitic rock, to Life, in its most varied forms.

Many of the chemical elements in the Periodic Table contribute to and are essential to the composition of Life, from a small bacterium to a blue whale.

Essential for eukaryotic beings (that is, those with a “true” nucleus that protects the DNA) are also small structures called mitochondria.

These tiny microscopic organelles exist inside every cell in our body with the exception of red blood cells. They are critical organelles for our life…they are where most of the energy that cells need to survive are produced, the energy we get from the nutrients we consume, and where true cellular respiration takes place.

We can therefore say that our mitochondria “burn” the nutrients we consume in the presence of the oxygen we breathe, to produce energy, water and carbon dioxide.

More than this energy-producing function, the mitochondria are a veritable factory of molecules important for our survival, converting nutrients and building blocks for the maintenance of the cell-building.

In the midst of this frantic activity, let's take a moment to identify which chemical elements from the Grand Catalog (ie, the Periodic Table) we can identify in the many molecules, from the simplest to the extraordinarily complex, that are part of the permanent or transitory nature of these fascinating organelles called mitochondria.

Let's start with those most commonly found in Nature, with their symbol and atomic number (ie the number of positive particles, or protons, in their nucleus) in parentheses: carbon (C, 6), hydrogen (H, 1), nitrogen ( N, 7) and oxygen (O, 8).

Found in the overwhelming majority of molecules in mitochondria, from the molecular oxygen we breathe, to the carbon skeleton (and which may contain nitrogen) of biological molecules, to the water we breathe out, which is the result of our mitochondrial cellular respiration.

Although, contrary to its name, it is not such a reactive species, hydrogen peroxide, when produced in low amounts, has beneficial and important functions in our body.

But mitochondria do not only have those four elements in their composition. The list is huge and in some cases surprising. Calcium (Ca, 20), potassium (K, 19), chlorine (Cl, 17), sodium (Na, 11), and magnesium (Mg, 12) circulate in the form of ions with functions to maintain the ionic gradients, generating charge currents that cross mitochondrial membranes and are a critical part of the functioning of that organelle.

Calcium actually plays very important roles because its entry into the mitochondria can have a double effect. For normal amounts, calcium has the power to speed up the metabolism of the mitochondria, just like a car accelerator pedal, acting on various proteins involved in energy production or other metabolic pathways.

In larger amounts, calcium can damage the structure of mitochondrial membranes, losing organelle integrity and even cell death.

Phosphorus (P, 15) is another critical element, being part not only of the mitochondrial DNA skeleton (just like nuclear DNA), but also part of mitochondrial energy molecules such as ATP (adenosine triphosphate).

The “smelly” sulfur (S, 16) is also part of the mitochondria, not only as part of the hydrogen sulphite gas (H2S), which can regulate cellular respiration, but also as an integral part of the active site of several enzymes ( proteins that speed up chemical reactions in our cells, including some involved in energy generation processes (ATP) in mitochondria.

Also with the same function, we find the presence of iron in the mitochondria. In fact, the enzyme that, in cellular respiration, turns molecular oxygen into water, has iron centers where this fantastic reaction takes place.

Another example is copper (Cu, 29), which is located in active sites of proteins involved in electron transfers for mitochondrial energy production.

Zinc (Zn, 30), surprisingly, is a very important element for several mitochondrial enzymes, which rely on this metal in their active sites. Examples are enzymes known as proteases, which process (“cut”) other proteins.

The catalog grows if we count with some mitochondrial “close encounters” with various “pass-through” ions, such as nickel (Ni, 28), selenium (Se, 34), vanadium (V, 23), fluor (F, 9 ), titanium (Ti, 22) and many others, which may have beneficial effects (such as for low doses of selenium), even negative effects (high doses of nickel, titanium and vanadium). Many of these elements originate from our diet or exposure to environmental pollutants.

This description shows how mitochondria are a sample of what we really are. A set of chemical elements, which walk alone or accompanied, and from which the mixture of the right elements in the right amount in the right place, results what we call Life. And this Life needs the spark of energy, which in our case is mostly achieved through these cell organelles called mitochondria.