The fire in São Brás de Alportel was reduced earlier this afternoon to an active front. This front plows […] 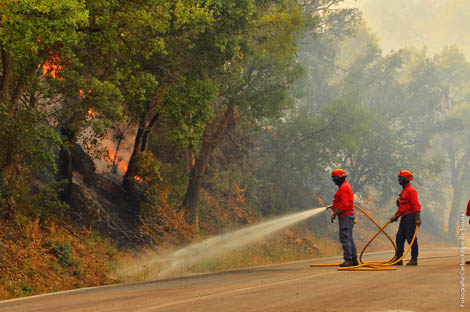 The fire in São Brás de Alportel was reduced earlier this afternoon to an active front. This front runs north-south in the Javali and Cova da Muda area and the Sul Informação found that, until an hour ago, it did not threaten homes.

According to the Civil Protection website, the fire was reduced to an active front at 15:05 pm, with "fighting operations proceeding favourably."

António Eusébio, Mayor of São Brás de Alportel, told the Sul Informação who was in the Javali and Cova da Muda area an hour ago, at a time when the fire “was far from the houses”.

However, the mayor recalls the importance of the aftermath phase to prevent the situation from becoming more complicated. "It is already known that there may be relights, so the aftermath is very important, and for that it is necessary that firefighters and air resources remain in place."

Despite official information reducing the fire to a single front, in the neighboring municipality of Tavira, the flames continue with intensity in Malhada do Judeu, parish of Santa Catarina, and in Peralva, Cachopo, as revealed to our newspaper, a source of the Tavirense Civil Protection.

In the fight against the flames, 1034 men remain, supported by 182 operational vehicles, 13 air assets and 19 crawlers.

The Portuguese army has about 250 men, accompanied by 30 vehicles, four of which are crawling machines, helping to fight the flames in the Algarve.

This fire, which has lasted for four days, broke out on Wednesday in the early afternoon, in Catraia, Tavira, and spread to the municipality of São Brás de Alportel.

Updated at 16:01 pm, including information about the fire in Malhada do Judeu (Santa Catarina da Fonte do Bispo)

Updated at 16:22 pm, including information about the fire in Peralva (Cachopo)