“Damn me, the damn particle, which is so hard to find”…. exclaimed Leo Lederman, Nobel Prize in Physics, and […]

“Damn me, the damn particle, which is so hard to find”…. exclaimed Leo Lederman, Nobel Prize in Physics, and thought it was right that this was the title of his book: “The Goddamn Particle”.

Its editor preferred to take advantage of some of the author's words, make some “slight” changes more appealing to sales, and the title “A particle of God” appeared. Frankly it must be a very good title, but in fact this is a less interesting debate about the Peter Higgs boson.

That was hard to find out there this was, as attested by 48 years of searches after the publication of Peter Higgs' article.

But here the question becomes subtle, and it is necessary to distinguish two different subjects to understand this subject: the particle and the force-field associated with it.

We all know the electromagnetic force field. In the fridge magnet, in the sun's heat, in visible light, in colors, even when we rub our hands and feel the heat generated by this action, by this work, as they say in Physics.

Well then, and who carries this force field? Well, it's a boson.

A boson is a force-field carrier particle.

Then we have the field, which will be the space where our “all terrain” walks, and we have the vehicle, or, if you prefer, the “transport service”.

In the heat of the sun, or in the light captured in the photograph taken on your mobile phone, the carrier particle of this force field is the photon.

Now the Higgs force field is the entire Universe. One thing it doesn't lack is space, it can be deduced. And what is this force field for the Higgs? It is the force field of the mass. And who carries the mass in matter? It's the Higgs boson.

But where and how was it found?

There we go to the how, let's start with the where.

Positive or negative does not mean “very cool” and a “great drought”. Good or Bad. It means that there are two senses in a flow and that we called them that to distinguish them. It's like having hot water taps with a red ball and cold water with a blue ball.

But it's not enough. Our subject is more in there, it is smaller, more difficult.

So I ask you to do a mental exercise. Imagine a huge building. The fantastic Olympic Stadium of…whatever you like best, this one. In the center of the land is a pea, all round. The stage is an entire atom and the pea corresponds to its nucleus. Inside we have already found two “friends”, but what about inside these friends, the neutron and the proton? So are the quarks, which were baptized by James Joyce.

These quarks are spherical, and are very funny because they never detect themselves alone, they are always in triplets (or in pairs) and are linked by “rubber bands”. They play a permanent game of stretching and shrinking, and the quarks, which are really active and very playful, change facets, change electrical charge and color.

Color is a property of quarks that has nothing to do with everyday colors, but all of this, things and matters of quarks, is called Quantum Chromodynamics.

And they don't sit still. It's a concern: quarks and “elastic” occupy almost all the space inside protons and neutrons.

But what are rubber bands? These are bosons called gluons. They carry the strong force and generate the electroweak force. It is these forces that allow the nuclei of atoms to be mostly stable. It is these bosons that generate the mass, through the Higgs mechanism, of the Higgs boson. Quarks-gluons, always glued together and always stretching, do all this.

And how do we discover the bosons? 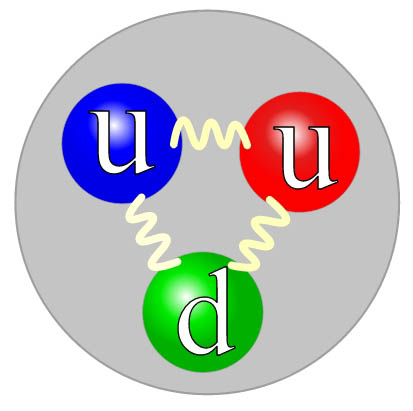 Today we use particle accelerators, and to really see the things that go on in these regimes of the very small, inside stadium peas, we make the particles collide head-on against each other. Boom. Catrapoum, boum, boum.

Do they play billiards? In a shot, the kinetic energy of our arms is transmitted to the balls, but the excess that does not go to the table is dissipated by the characteristic sound of the shots. Knock, knock, knock.

However, in a vacuum there is no sound, so the excess energy generates new particles, or generates particles that are already known.

It has to be, they're colliding, literally crushing, Protons at 99.999 99% of the speed of light in the LHC's CMS detector, the Large Hadron Collider (particles made up of Quarks).

If, in these billions of events, an excess of energy is found that does not correspond, by all accounts, to the already known particles, then….A new particle has been found.

By its behavior, by the particles it emits and absorbs, it is possible, with tremendous difficulty and with amazing computing power, to distinguish the nature of this new friend.

But, people ask very well, what is the use of this discovery, in practice what will come out of it?

Well, for now, there is an excellent possibility of understanding the Universe we live in, for now the 4% of normal everyday matter and most likely a better understanding of the 24% of dark matter that surrounds us, including in the room where they are. And we will have 72% of the Universe, dark energy, to be discovered.

Yes, scientists are very happy, but what about practical applications, what are they or will they be? Well, this is science fiction, it is likely that the Chemistry of materials will resurface even with better materials, stronger, lighter, smaller, friendlier to the environment and Humanity, and this can be very important and useful, for example, for construction.

Remember that when the laser was discovered it was useless, and today any store, even a modest one, has optical reading in the box, by laser.

So the most important application will most likely be the one that nobody can imagine today.

Given the emotion of Peter Higgs and before this fantastic discovery, it is now for the future that we will have to wait.

Finally, the unavoidable analogy. There are the honey and molasses analogies, where a professional swimmer will have a hard time moving forward if the pool was filled with honey instead of water. The force-field is the pool, and the interaction of the honey particles with the particles of the swimmer's suit and skin will be the mass mechanism, the Higgs mechanism, to act.

Peter Higgs himself prefers the celebrity analogy. In case the scientist Albert Einstein, by absurdity, presented himself to give a lecture at the University, all the students would want to ask him questions, ask for an autograph, ask how he is, and ask many questions, many interactions, and thus retain him on the university campus . Albert Einstein would have a great mass.

Now, if a little known person crosses the university campus in a relaxed way, he/she arrives at the Aula Magna much faster, because no one, or few people, will keep him with questions and he will add much less interactions and soon a much smaller mass.

The Higgs boson is like that. It considers some particles to be true celebrities, and it doesn't connect any, it doesn't interact directly with other particles, so, of course, with particles that don't have mass, like the photon, the Z boson and even the gluon.

Now a detail: as the gluon is linked to Quarks, it enjoys an exception regime, to confirm the rule.

Before the end, let's say what is expected very soon: the following articles are awaited with great expectation among the scientific community. One of the articles will be published at the end of this memorable month of July 2012 and will be a collaboration between the ATLAS and CMS experiences.

The second article announced will be published later this summer and focuses on the excesses of Higgs interactions that decay into pairs of photons.

Finally, I would like to thank all Portuguese citizens. It was with your taxes that CERN was financed, thank you very much for your effort, for facing very serious difficulties and for still helping Science.

This discovery is also the result of your work, and this Merit is entirely yours.

Science in the Regional Press