The fire that since yesterday afternoon has been destroying an area of ​​forestry settlements in the Serra de Tavira, near […] 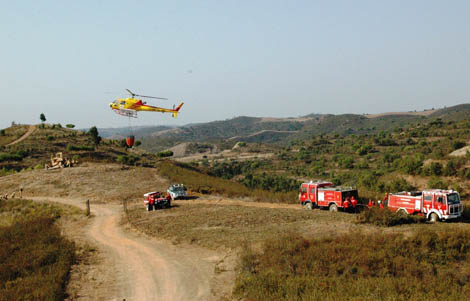 The fire that since yesterday afternoon has been destroying an area of ​​forestry settlements in the Serra de Tavira, near Catraia (Cachopo), continues this morning on four fronts, according to the status report made at 6:10 am on the Civil Protection website.

At that time, the fire was being fought by 215 men, including 187 firefighters, assisted by 26 operational vehicles.

This morning, with the entry into action of air assets, the Operational Command hopes to be able to control what is, at this moment, the largest of the two active fires in mainland Portugal and the only one not yet controlled.

Just now, at 7:16 am, a second tracking machine in the Câmara de Tavira was activated, to help cut the paths to the fire.

The fire was declared at 14:10 pm yesterday, Wednesday, near Catraia, parish of Cachopo, in the mountains of Tavira.

At 14:38 pm, the intervention of the heavy bomber helicopter was requested and at 15:17 pm two medium amphibious bomber planes were called from the North of the country. With nightfall, air assets were withdrawn from the theater of operations.

For security reasons, the operational command even cut, last night, the EN124 road, between Cachopo and Barranco do Velho, which returned about two hours later to be reopened.

In the Algarve, according to the website of the Instituto de Meteorologia, only the municipality of Monchique remains at maximum risk of fire. Tavira, like eight other municipalities in the Algarve, presents a very high risk.

In terms of temperatures, the IM keeps the Algarve under yellow warning due to the heat, forecasting for today a maximum of 33ºC in Faro.