User Committee was present at the motorcycle parade in Faro

The Commission of Users of Via do Infante took another action against tolls in the Algarve, being present in the […] 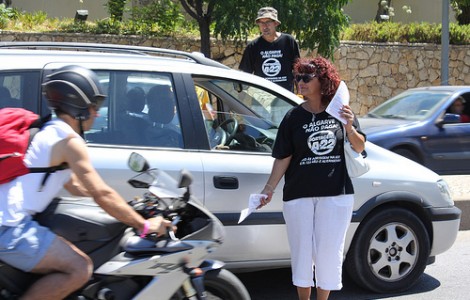 The Commission of Users of Via do Infante carried out yet another action against tolls in the Algarve, being present at the great parade that the bikers held in the city of Faro, yesterday the 22nd of July.

Commission members distributed leaflets and used banners demanding the suspension of tolls on Via do Infante.

One of the banners said “EN 125 Estrada da Morte – Return the Via do Infante to the Algarve” and was placed on a trailer with a car that had an accident on the EN 125, whose driver died.

CUVI considers that, this year, the crisis and “the introduction of tolls on Via do Infante” caused the reduction of a few thousand motorcyclists.

«The PSD/CDS government, by imposing tolls in the Algarve, with PS support, in addition to dramatically aggravating the economic and social situation in the region, increasing the number of unemployed and the difficulties and bankruptcies of companies, led to the return of “ road of death”, the EN 125, with road accidents and daily injuries, and several deaths».

But, «with the tolls, it also seriously damaged one of the biggest events – the concentration of bikers – of an international level, which has been held in the Algarve every year for more than three decades».

The User Committee «warmly welcomes the large concentration of bikers and thanks the Moto Clube de Faro all the support and collaboration provided».

In addition, CUVI «again appeals to the government to suspend tolls on Via do Infante before the arrival of August, thus preventing further damage to the region and, particularly, the increase in road accidents on the EN 125, with the his list of injuries and deaths. The stoppage of the requalification works turned this road into an increased mortal danger».

The Commission states that "it will not sit back until the total and definitive abolition of tolls in the Algarve" and promises more actions, "many of them by surprise", throughout this summer.