A Spanish Canadair plane is already on its way to the Algarve to help fight the fire in Tavira, raising […] 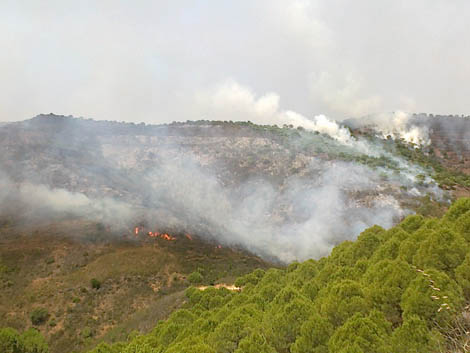 A Spanish Canadair plane is already on its way to the Algarve to help fight the fire in Tavira, bringing to eight the number of air assets involved in operations in what is the biggest fire in the region in the last five years.

The news was given by Abel Gomes, operational commander, during the briefing that took place around noon in Cachopo.

Currently, four bomber planes, three helicopters (one heavy, one medium and one light) are involved in the firefighting process, as well as 379 men, supported by 116 vehicles.

Abel Gomes revealed that, in the morning, there was a reinforcement with operatives coming from Lisbon and Setúbal, with three more brigades already on their way from Setúbal, Beja and Évora, with 26 men each, for a total of 78 operatives.

The help of five platoons of military personnel was also requested.

"We continue to have a fire with four fronts, two of them with great intensity, with very strong, very violent reactivations, which is clearly hampering the work of the operatives in the field," said commander Abel Gomes.

"It's not been easy to control this fire," he admitted.

As for the extent of the area affected by this fire, which started almost 24 hours ago, near the village of Catraia, parish of Cachopo, Abel Gomes said that it is an "abnormally large fire, but we do not yet know its extent".