The fight continues against fire in Serra do Caldeirão

A front was rekindled this morning, around 6:00 am, in the Serra do Caldeirão fire, but an hour later the […] 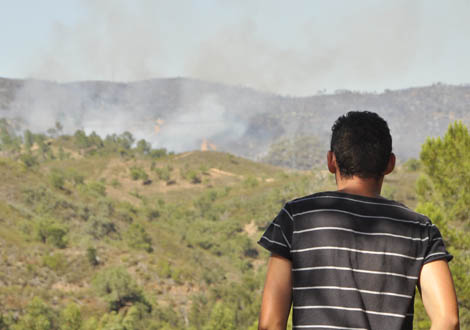 A front was rekindled this morning, around 6:00 am, in the fire in Serra do Caldeirão, but an hour later the fire was given by the Civil Protection as once again "overwhelmed".

The relighting of this front, at a time when the wind is the firefighters' main enemy, is a warning for the days' work that still awaits them in the vast area of ​​75 kilometers affected by the fire that raged since Wednesday afternoon, and which only yesterday, around 17:00, it was considered dominated.

José Codeço, second national commander of Civil Protection, has already warned that the work to extinguish the fire could take several days. “The fire is under control and we believe that it will no longer spread, because the resources will remain on the ground. But until we enter another phase it may take longer than it took to be mastered,” he said.

At the moment, more than 1000 men remain on the ground, including firefighters from all over the country and the military, but the air resources have not yet been activated, and will only be used if they are needed again.

This fire, which broke out on Wednesday afternoon in Catraia, near Cachopo (Tavira), probably due to a spark during the assembly work of a wind farm, destroyed more than a third of the municipality of Tavira and half of São Paulo. Brás de Alportel, burning, in its path, areas of cork oak, pine and eucalyptus trees, vegetable gardens, houses, cars, agricultural implements and warehouses, animals. As the mayor of São Brás said, “it is a serious blow to the life and economy” of the municipality.